A nurse is a gift sent from above

Prior to the establishment of the Nurses Board, private organisations such as the Royal Victorian Trained Nurses’ Association registered nurses who completed and passed in one of their training schools. In 1901 the Australian Nursing Federation, Victorian Branch, was first constituted as the Victorian Trained Nurses Association (VTNA).  The role of the Association was to register nurses and introduce a uniform curriculum of training. From 1924 the role of registering nurses was the responsibility of the Nurse Board (VA 3144).  And, whilst these volumes do not necessarily correlate to nurses who served during World War 1, they are a resource which may help researchers locate Victorian nurses who trained prior to the declaration of the war.

By 1917 the demand for nurses on the warfront was still increasing as the war raged on.  It had been suggested that Melbourne hospitals help with the supply of nursing staff by decreasing the training period from four years to three. Senator George Pearce, the Australian Defence Minister noted the great demand for nurses by the Imperial authorities, yet the supply was far short of the demand and by 1917  2,000 nurses had been accepted in Australia for war service. 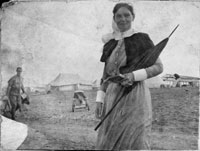 Matron Wilson nursed in both World Wars and after her death in 1957 was given a service with full military honours. Upon her death the Matron left provisions in her will for several military and nursing organisations.