Did you know Phillip Island was once known as Grant Island, or that in 1842, Rhyll Mud Bank went unnamed on a map with the simple notation ‘Dries in patches at low water’?

The striking map of Port Western from 1842, below, reveals all this and more. The Island was possibly named after navigator James Grant who in 1801 visited the adjoining Churchill Island (which he also named) and planted a crop of corn and wheat. MCS in the title of this map denotes the category from which it originates within The Historic Plan Collection (VPRS 8168) which includes tracings of coastal survey plans, shipping charts of Victorian, Australian and  overseas ports and drawings of harbour developments from 1802 to 1908. 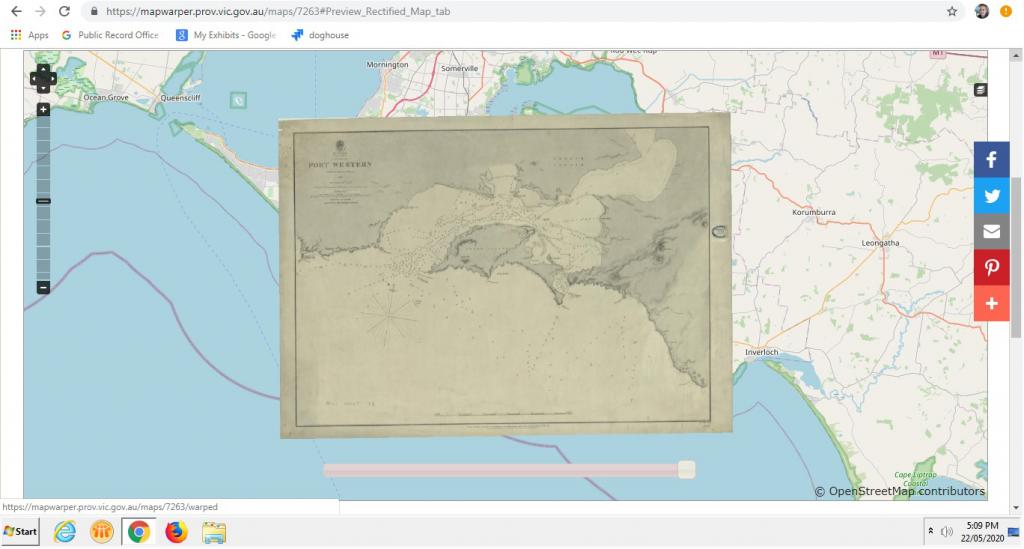 Learn all this and more thanks to our Historic Plan Collection and a little online tool we like to call the PROV Map Warper.

In June 2019, researchers together with some passionate PROV volunteers and staff were able to rectify, or overlay thousands of Parish plans onto a contemporary map of Victoria in their exact location, using the new PROV Map Warper service. The service has proved very popular with researchers and offers an opportunity for PROV to now crowdsource the rectification of digitised cartographic series. Read more about the launch of the service here. Fast forward a year and we have added a new series of plans to the site for users to rectify and use within their research: The Historic Plan Collection (VPRS 8168).

A taste of the historic gems on offer

Many of you will already know of the gems that await you in the Historic Plan Collection. Thousands of beautifully drawn maps across 48 categories such as;

CS COASTAL SURVEYS (1802 - 1923). Precise surveys of the Victorian coastline conducted between 1840 - 1870. These surveys were intended to define the configuration of the coastline, describe the structure of coastal vegetation and identify any land occupations. They were an integral part of the early topographic survey of Victoria. Many were compiled by the surveyor George D. Smythe. Published shipping charts of the 1860s and 1870s form a small part of the collection; the few plans which pre-date 1840 are copies of important surveys completed before the Melbourne Survey Office was established in 1837.

DIST DISTRICT (1851 - 1882). Working plans compiled and used in regional survey offices in central Victoria, mostly during the 1850's. They show Crown allotments surveyed for sale, basic physical features, tracks, and occasionally aboriginal sites. Specific land occupations such as tents and buildings are plotted where land use did not conform with surveyed property boundaries.

EXP EXPLORERS ROUTES (1858-1888). Tracings and published maps of routes of exploration in Victoria and Australia generally. The maps of exploration in other colonies appear to have been collated for the production of a special map of Australia. (See EXP 23 and EXP 45).

Here are just a few of our favourites, already rectified by enthusiastic researchers: 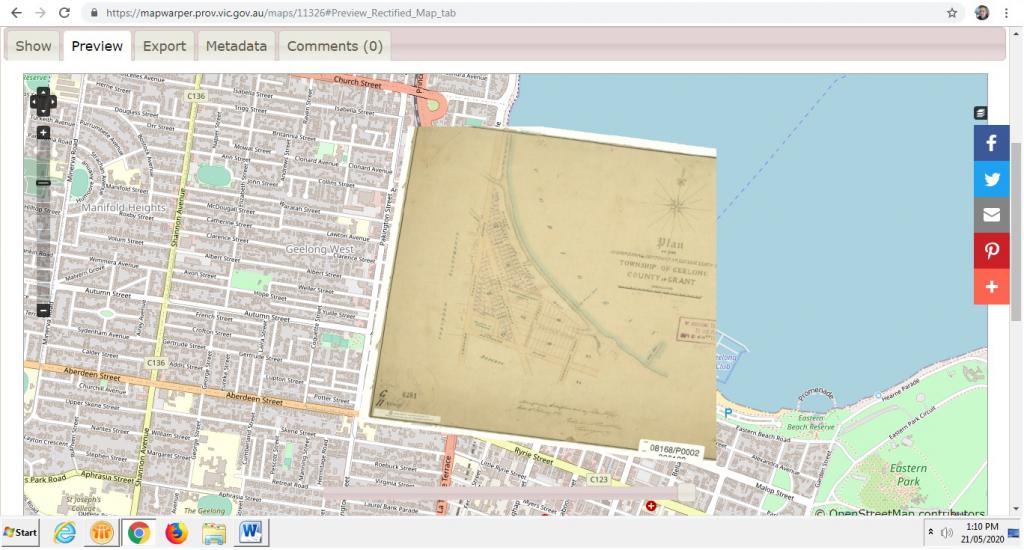 The above plan comes from the category SYDNEY PLANS 1837 - 1851 Manuscripts of lands surveyed for settlement prior to Victoria's separation from NSW in 1851. The plans were forwarded to the Surveyor-General's Department in Sydney as official records but were returned to Melbourne some years after Victoria became an independent colony. The plans are normally coloured and, apart from Crown allotments, often show early tracks and buildings and have general descriptions of soils and vegetation. The map in preview on Map Warper illustrates beautifully the value in providing an overlay of historic records on the contemporary landscape. We can see quite clearly how change has occurred or not due to human occupation. The above map shows a beautifully drawn slice of the foreshore along modern day beach road, depicted in watercolour  with the very cute annotations of a ‘bathing place’ and a ‘new pier’. 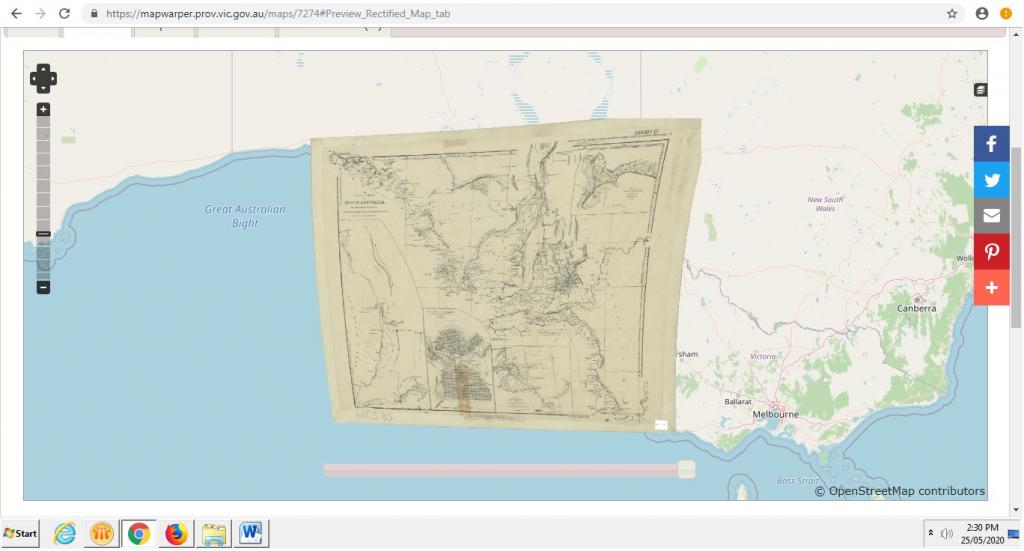 The above  map is particularly interesting not only because of the geological descriptions and depiction of Kangaroo Island but because it reminds us that VPRS 8168 includes many maps drawn of locations outside Victoria, taking in most states. In fact this is one of its cross jurisdictional strengths.

There are even some located very much beyond our borders such as the one below of the Electrical Telegraph from Australia to China no less. Maybe you’ll be the first to help us rectify it! 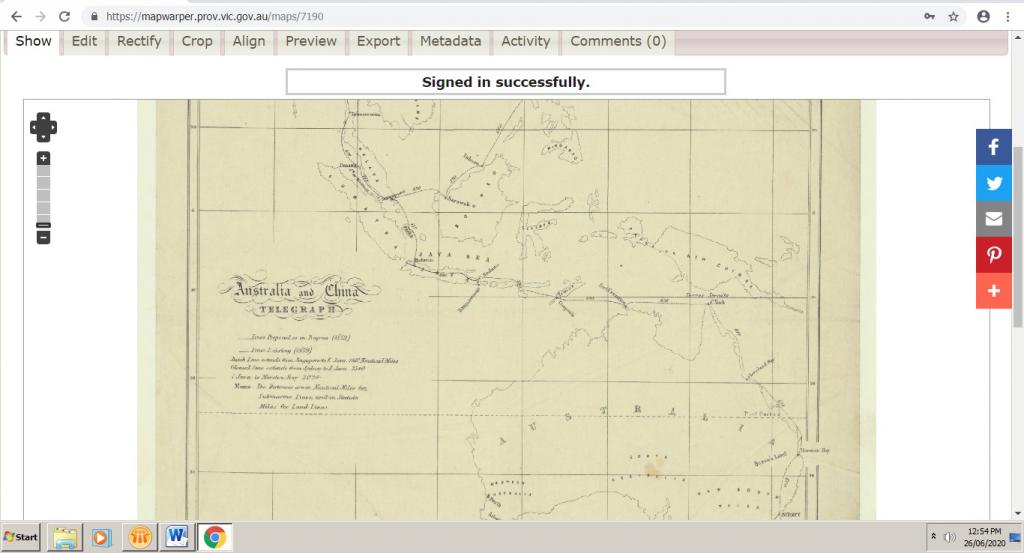 Why not help us rectify the rest?

With thousands of maps from Historic Plan Collection left to rectify why not create a PROV Map Warper account today and help us turn them all into overlays like the examples shown above.

Get started on Map Warper.