Some of the records kept in the North Melbourne repository have made their way into our collection with little descriptive information. This is definitely the case for some of the older series within our holdings - recordkeeping as it is today was not so commonplace in the early 20th century.

Staff and volunteers combat this archival reality through various collection management projects. Sometimes we physically go through unit by unit, creating record description lists of items within boxes. These lists are then uploaded onto our online catalogue. Alternatively, if the series has a separate index or 'control record' we can transcribe and/or digitise those records instead, providing access to the name/subject/file number index and making records more accessible. This is ongoing work that takes many hours of time and effort but it is of vital importance.

Fire Inquest records (VPRS 407) are a prime example. A project for this series was completed a couple of years ago, as there were no item details for any of the case files. Previously, researchers interested in Fire Inquest records between 1858-1940 were having to go through all 21 boxes that make up the series, to potentially(!) find a file of interest. Researchers can now browse through the listing of files or search within the series online, using the name of a person, company or place (ie. Hotel, ship) in which a fire occurred.

Because of this, we are able to discover interesting historical stories, like the ones which relate to the burning of the City of Melbourne in Hobson’s Bay, in January 1868 and the burning of the Lightning (image below) in Corio Bay, in October 1869...

Fire within the storeroom!

Curiously, both the City of Melbourne and Lightning ships sailed under the same flag with the Black Ball line the agent of both vessels. The captain’s name in both instances was identical, both commanded by a Captain Jones. The fires were also observed at the same time, about one o’clock on a Sunday morning, and were supposed to have arisen from the very same cause – combustion among the wool in the fore hold.

PROV has the original fire inquest records for the two ships. These records contain the inquisition form, which is the official record of the findings and includes the final verdict, and they also have the written depositions of witnesses that appeared at the trials.

The inquest for the Lightning was held at Mack's Hotel, Geelong, on the 3rd November, before Mr Saw, coroner, and a jury of 15. The jury returned a verdict that the ship was destroyed by fire; that it did not originate from spontaneous combustion, and there was no evidence to show how it occurred but the captain and officers did all in their power to save the ship.

This is the signed deposition of Captain Henry Jones of the Lightning:

The two ships are historically significant in their own ways: The Lightning as one of the fastest wooden ships ever built and the first clipper built in the USA for British owners. It is also considered to be the worst shipping disaster in Geelong's history. The ship spent its whole career carrying cargo and immigrants from England to Australia.

The City of Melbourne was also an American-built fast sailing clipper. After it sank in 1868, it was raised and used within Port Phillip Bay as a coal hulk, and was also acquired for defence use as a block ship. The Victorian Heritage Database has images of the shipwreck in Hobson’s Bay, showing the structural detail and a pipe from the vessel, as it remains in the sea to this day.

PROV offers a range of funding to support Victorian community groups to preserve local history and heritage, this includes the Local History Grants Program. Volunteers from the Friends of Flagstaff Hill were Round 13, 2014-2015 recipients. The grant of $3,000 allowed them the means to purchase equipment to catalogue the Flagstaff Hill Maritime Village collection, which contains Australia's largest shipwreck items. Two such items relate to the Lightning - an original photograph of the burning ship, with glimpses of the crowds on the pier and an original piece of timber from the vessel.

There are many other series researchers can source to research ships. Inward shipping reports were kept by officials in volumes such as can be found in VPRS 38. All ships which had cargo were required, under customs legislation, to make a report to the customs officers before the cargo could be landed. Details recorded in these volumes vary but usually include the vessel’s name, country of vessel, tonnage, name of master, cargo information, number of crew, place of discharge etc. Only 8 volumes have survived and made their way into PROV’s collection ranging from the years 1843 to 1885. It is not known whether there were earlier or later volumes.

Some of the most heavily used immigration records held by PROV are passenger lists, for ship voyages to and from Victoria up to the year 1923. Researchers have been able to search through these records online after a large volunteer project was completed, many years ago, to create a name index of the lists. Here is the original handwritten account of the unassisted passengers who arrived in Victoria via the City of Melbourne on the 16th December 1867 at Hobson’s Bay.

The image below is of the very pier where passengers would have disembarked and where the City of Melbourne itself caught fire. It is taken from PROV’s enormous photographic archive of the former Public Transport Corporation. Before this archive was digitised and made available online, researchers were having to physically look at a card index in our Reading Room to identify photographs of interest, which we would then make available for viewing. To see what other records we have digitised, see our Online Collections page.

Cataloguing is obviously a very important aspect of documenting collections, many are unaware that for the majority of archives, this is continuing work. Certain sets of records within the PROV collection are definitely easier to work with than others because of this. With digitisation, our collection is continuously growing to become even more accessible, in a format that allows for searching and browsing. This facilitates those who wish to learn, scrutinize, research and engage with ideas, government policy, events and time periods. At the same time, we are ensuring the protection of the original records by reducing their handling, helping to preserve them for future generations, so they too may access our state’s historical records. 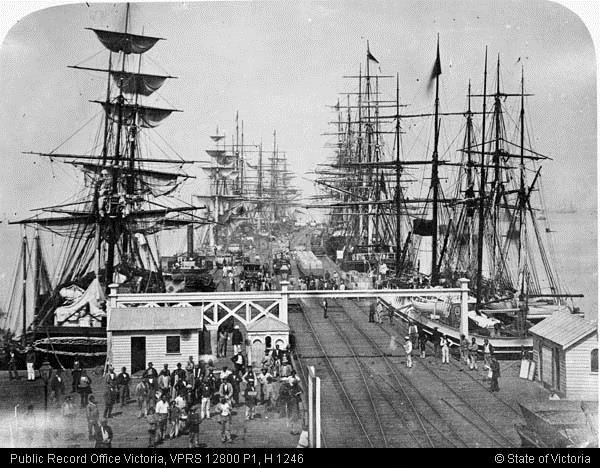