Whilst no one should glorify death at the hands of someone else, it is something that is a part of our society.

Mark “Chopper” Read’s final interview, which aired on Sunday 20 October on 60 Minutes, displayed a callous and cold blooded murderer, with a complete and utter lack of remorse. Until Sunday’s confessional, “Chopper” had never been convicted, and therefore incarcerated for the act of murder. He had spent years behind bars for a litany of offences, including armed robbery, assault, arson and kidnapping.  Sunday’s confessional from the grave identified four murders, one of which had been deemed a ‘missing person’ case.

PROV holds inquests and coronial investigation records from 1840-1985, and it is within this date range, which two of these murders took place.

Inquests can hold a range of information, including photographs of the victims and crime scene, witness statements, police statements and any relevant information which may have helped to identify the victim.

Desmond “Dessie” Costello had a long criminal history which included violence and dishonesty dating back to 1943. Costello, a union heavy weight and painter and docker by trade was found dead from gunshot wounds in December 1971.

The first of four murders, which Read confessed to in his final interview, was an organised ‘hit’ and took place in Clifton Hill. Costello’s body was found in an excavation pit where construction was taking place for the new Eastern Freeway on Alexandra Parade. Unidentifiable at first, the body was assessed by a fingerprint expert, who identified the victim as Desmond St. Bernard Costello. Once the identification had been made enquiries began to trace his movements prior to his death. Police hit road blocks when Costello’s associates on the docks refused to assist in their investigations. At the time an election was underway and several painters and dockers had been shot and severely assaulted in what appeared to be ‘shows of strength by the two factions attempting to gain control of the union’. This would come to be known as the ‘Waterfront Wars’.

The final findings from the coroner into Desmond Costello’s death stated that he died from ‘gunshot wounds to the head feloniously inflicted on or about the 12th day of December, 1971 by a person or persons and at a place unknown to me’. 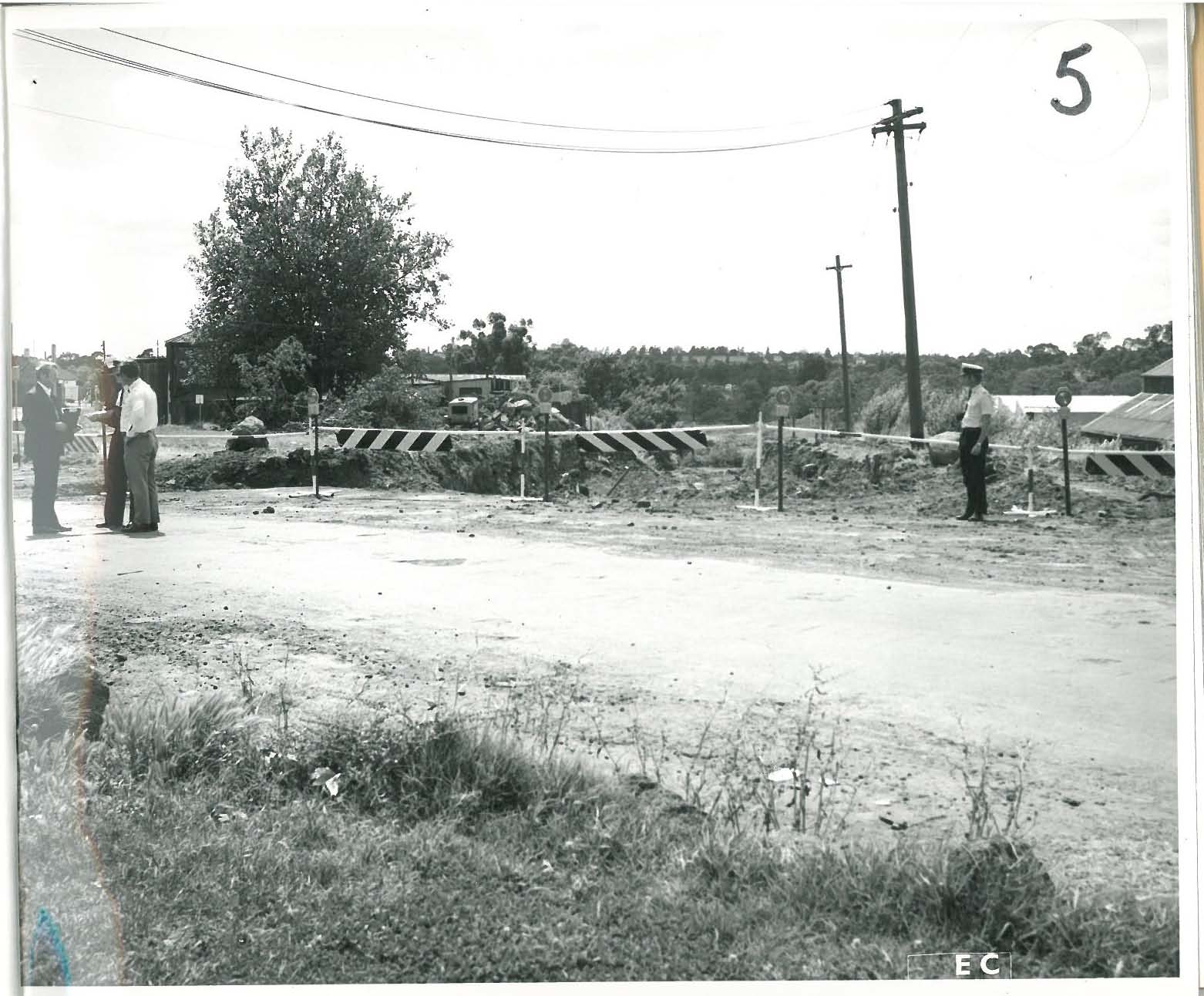 Reginald Edward Isaacs was first sent to prison in 1952 for child sex offences.  He was subsequently sentenced several more times for various crimes, including murder.  In his final trial for murder in 1974 Isaacs was sentenced to the death penalty and sent to Pentridge Prison.

In his native Britain, Isaacs had been discharged from the Army as medically unfit on psychiatric grounds.  After his time in the National Service was involuntarily cut short he migrated to Australia, where his family subsequently followed. It would be in Geelong in 1950 where Isaacs’ first attempted suicide by drowning himself in the Barwon River after he started to experience ‘homosexual urges’. And it was noted throughout his lengthy inquest that he had suicidal tendencies.  So when he was found dead in his cell in ‘D’ Division having likely hanged himself, it was deemed suicide and the case was closed. All of the evidence had pointed towards him taking his own life, and with his history of self-abuse it was apparently unsurprising to the prison officers, police, his psychiatrist, prison medical staff and the coroner that this was the eventual outcome of his life of crime.

However, “Chopper” Read’s final interview told another story about the death of Isaacs.  Read ‘confessed’ to playing a part in Isaacs’ death, alongside Charles “Mad Charlie” Hegyalji, a known underworld gangland criminal in Melbourne.  The pair reportedly made their way into Isaacs’ locked cell and beat him to death before tying him up and making it look like he’d taken his own life. 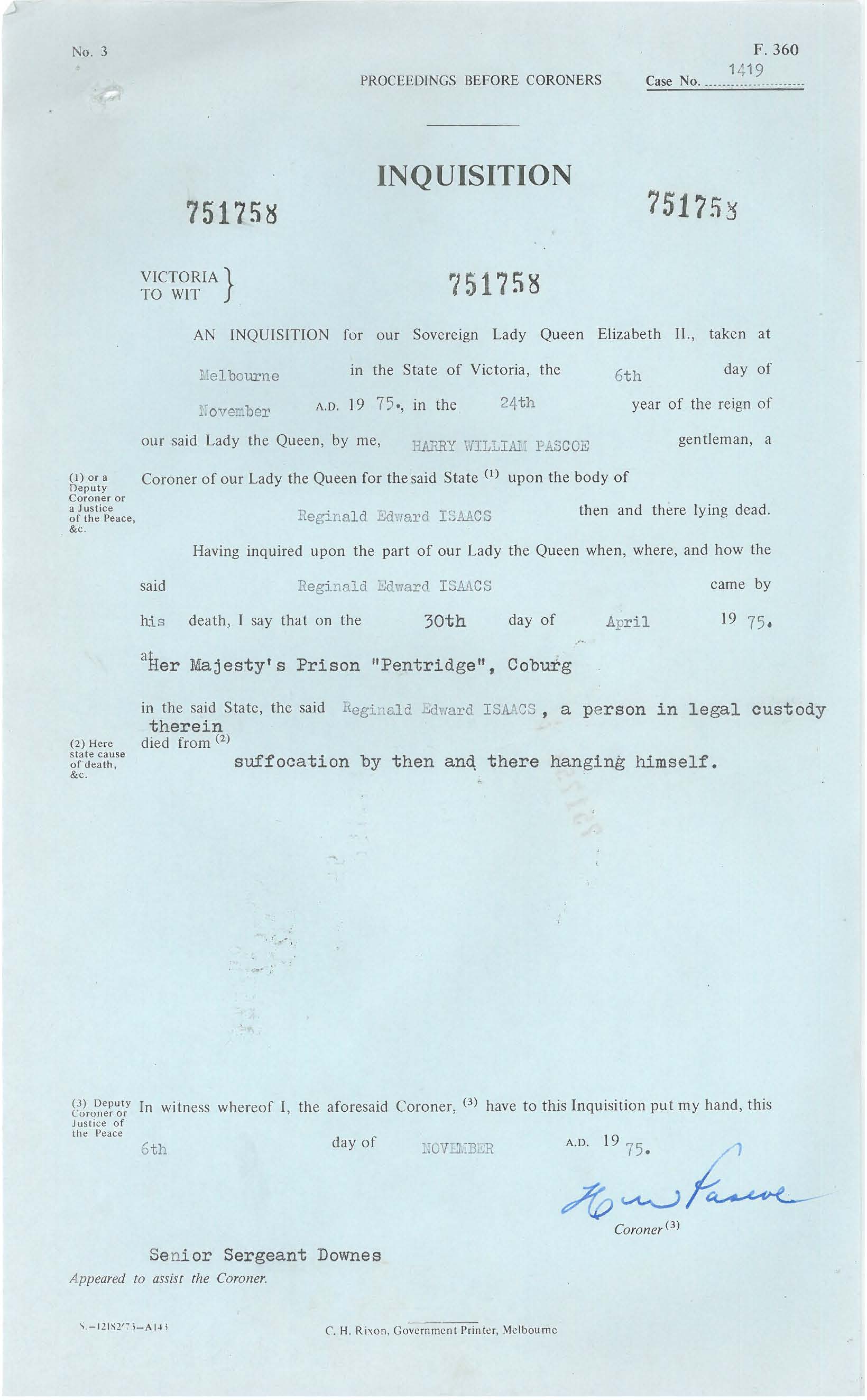 Whether these deathbed confessions by Mark “Chopper” Read, who led a life of crime, are in fact true will be for the Victoria Police to investigate if they so see fit. However, for now, we can only speculate.

To order to view the original inquest records, please click on the below links.

*Please note that any information obtained here has been done so with the use of the inquests held at Public Record Office Victoria (PROV).
Share
Archives
Recent Posts
Categories
Back to top