We have items in the PROV Collection that pose considerable challenges in housing, storing, moving or providing access.  Our Repository/Collection Management staff are able to deal with these challenges by utilising our training or past experience in storage/space management, shelving/container design and records retrieval processes.  An array of lifting and other equipment backed up with rules, procedures and regular (refresher) training takes care of the myriad potential OH&S issues for awkwardly sized or heavy items. 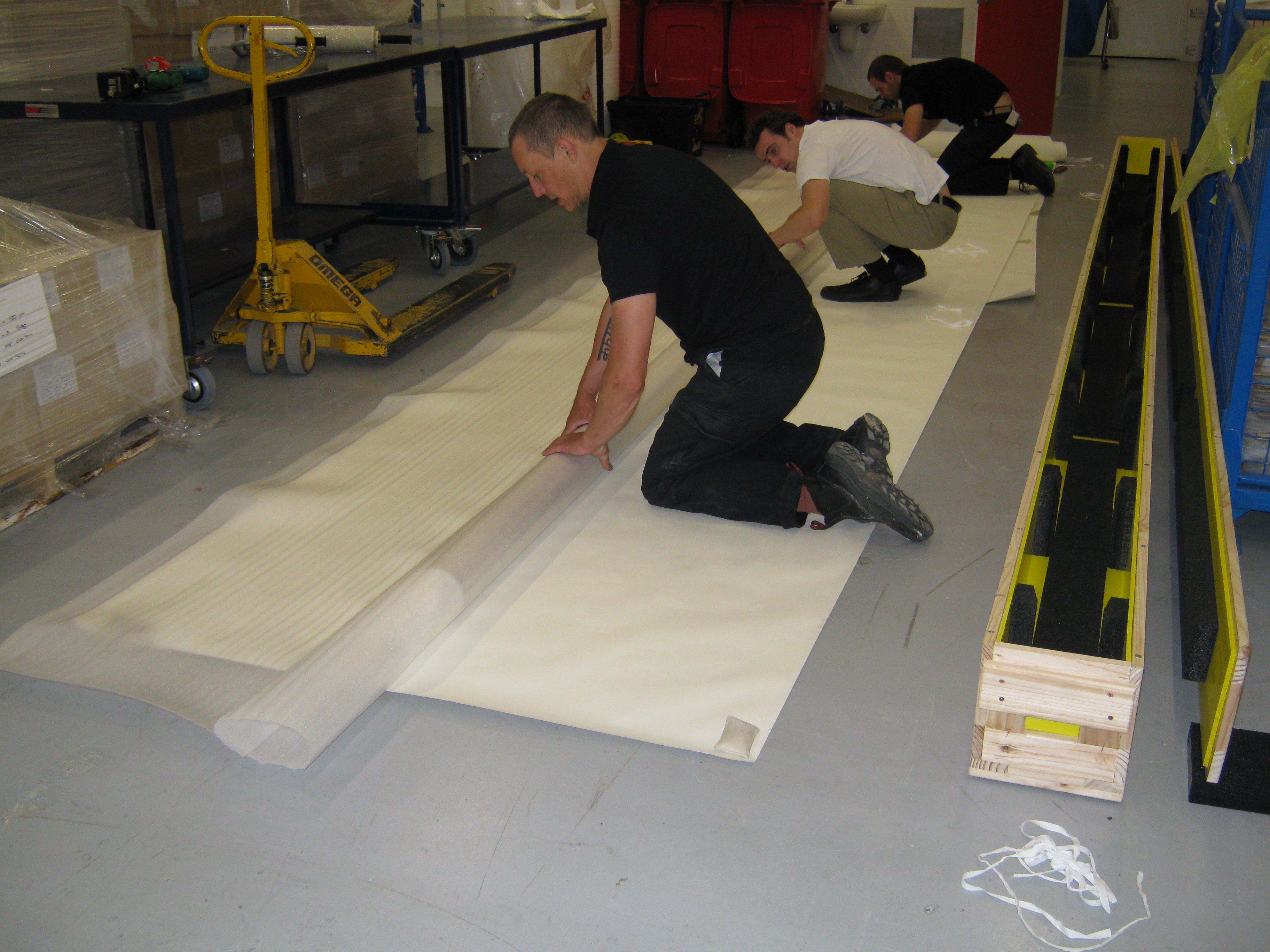 In terms of challenges though, one record stands head and shoulders, literally as well as figuratively, above all others.  It is our largest plan, a 6 by 4.5 metre map of Victoria created to show 10 million acres of Crown Land to be alienated under the Land Act of 1862.  As this Act has been characterised by historians as the Duffy Land Act, the map is also known as the Duffy Map, although most PROV staff refer to it as “The Big Map”.

The map had been housed in an extremely heavy wooden cedar box constructed by Parliament House staff probably when it was no longer required for display in 1865.  The entire map was placed in this box with a lid that was nailed shut.  The map has remained in this box at PROV, although its sheer size coupled with the lack of floor space at our former Laverton Repository meant we had to wait for construction of the Victorian Archives Centre (VAC) before we could receive it.  Consequently, it holds the distinction of being the first “new” record officially accessioned into the PROV Collection at VAC.

Even then, it is too big to be stored in our compactus banks.  It is housed in a long span shelving unit used for the largest of our rolled plans in a location which minimises both the distance these plans are to be carried and the number of corners to be navigated.  Not that this makes moving the big map any easier!

Last year the map was displayed on level 3 at VAC, necessitating its first ever movement between floors of the building.  The only option available to us was to hire a truck to transport it from level 1 on Macaulay Road around the block for entry through the level 3 entrance on Shiel Street (and back again).

But the issues to resolve didn’t end there. To display it, we had to deal with the following considerations; Where to put it?  How to treat the surface it is to be placed upon?  What to place underneath it?  How to unroll the map, keep the map flat whilst unrolled and allow people to view and roll up again?

The Centre for Cultural Materials Conservation (CCMC) works with us on each occasion enabling the opportunity for the condition of the record to be assessed and minor repairs made as appropriate.  A host of additional issues were also addressed when we digitised the map as demonstrated in Cate Elkner’s article in Provenance September 2007.

The map came to PROV in remarkably good condition, thanks to the specially made box.  Since its accession, interleaving lens tissue has been placed within the roll to minimise print migration and the whole item encased in a foam wrap called cellair.  These measures have enlarged its overall size meaning that one of the wooden batons along the bottom of the map could no longer be stored with it inside the box.  This had already been separated from the map, probably to ensure it fitted into the wooden box in the first place.  I wonder whether the designers of the box underestimated the dimensions of the original map?

All of this provided an idea of the issues that needed to be considered in making the map available to the National Museum of Australia Canberra for display in their recent exhibition The Irish In Australia.  Apart from its initial movement to PROV, this was only the second time the plan had been on the move outside VAC, the first time it had ever been outside of Victoria and, I believe, the first time it had been on display to the public for an extended period since 1865.

In terms of the movement of the record, some concern centred on the wooden box.  The box, which has never been moved within PROV, is extremely heavy.  It accounts for approximately 90 per cent of the total weight and requires a minimum of six people to carry it. There was also some concern that it would be damaged during the rigors of a trip to and from Canberra.

Fortunately, Nick Selenitsch of CCMC was on hand to assist us.  He commissioned a firm to construct a box that would be significantly lighter and could provide as much protection as the cedar box.  The designer box consisted of a pine wood frame with sides made from corflute, a form of reinforced corrugated polypropylene.  High density foam was used inside the box to provide support to the plan and ensure it did not move.  After removal of the upper baton, a task necessary to ensure the display of the item, the map was re-wrapped and carefully placed into the box.  A lid made of the same materials was screwed shut.

Are you aware of other unusually sized, awkward or challenging items in archival collections that require special storage or transport arrangements? If so, feel free to add your comments, we’d love to hear from you.