The Victoria Police Inward Correspondence Files held at Public Record Office Victoria include records dated from 1894 through to 1935. Within the files you will find correspondence on a range of activities of the police of the time including information on the purchase of horses, details on unsolved break-ins and particulars on specific cases like this one, about a missing child in 1919:

“On the 15.10.19 the above named girl left Melbourne at 5pm by the Sydney Express accompanied by her father Doctor James Simpson Macpherson.

When they arrived at Albury at about 10pm the girl disappeared and the father has not seen her since.

The girl was evidently in league with her uncle Edmund Ashworth Thornley a squatter of “Kangabong” Hawkesdale.

Further correspondence and newspaper reports indicate that Mary, granddaughter of Nathan Thornley and heir to his estate, had been the subject of a court battle for custody for some time. After the death of her mother she had lived with her mother’s family and in Geelong at the Church of England Grammar School while her father was in Canada. He returned to Australia in 1919 and was granted legal custody of her. He planned to take her back to Canada with him to live with him and his new wife. Mary had told her family members she didn’t want to go with her father. When her father’s back was turned at Albury Station she fled and her father testified in court that he believed she was helped to flee and in essence abducted by her aunt and uncle.

At the time, according to the files, the police could find no trace for her.

“So far all efforts to trace the present whereabouts of the missing child have been futile. Dr Macpherson has been informed of the result of inquiries to date.” 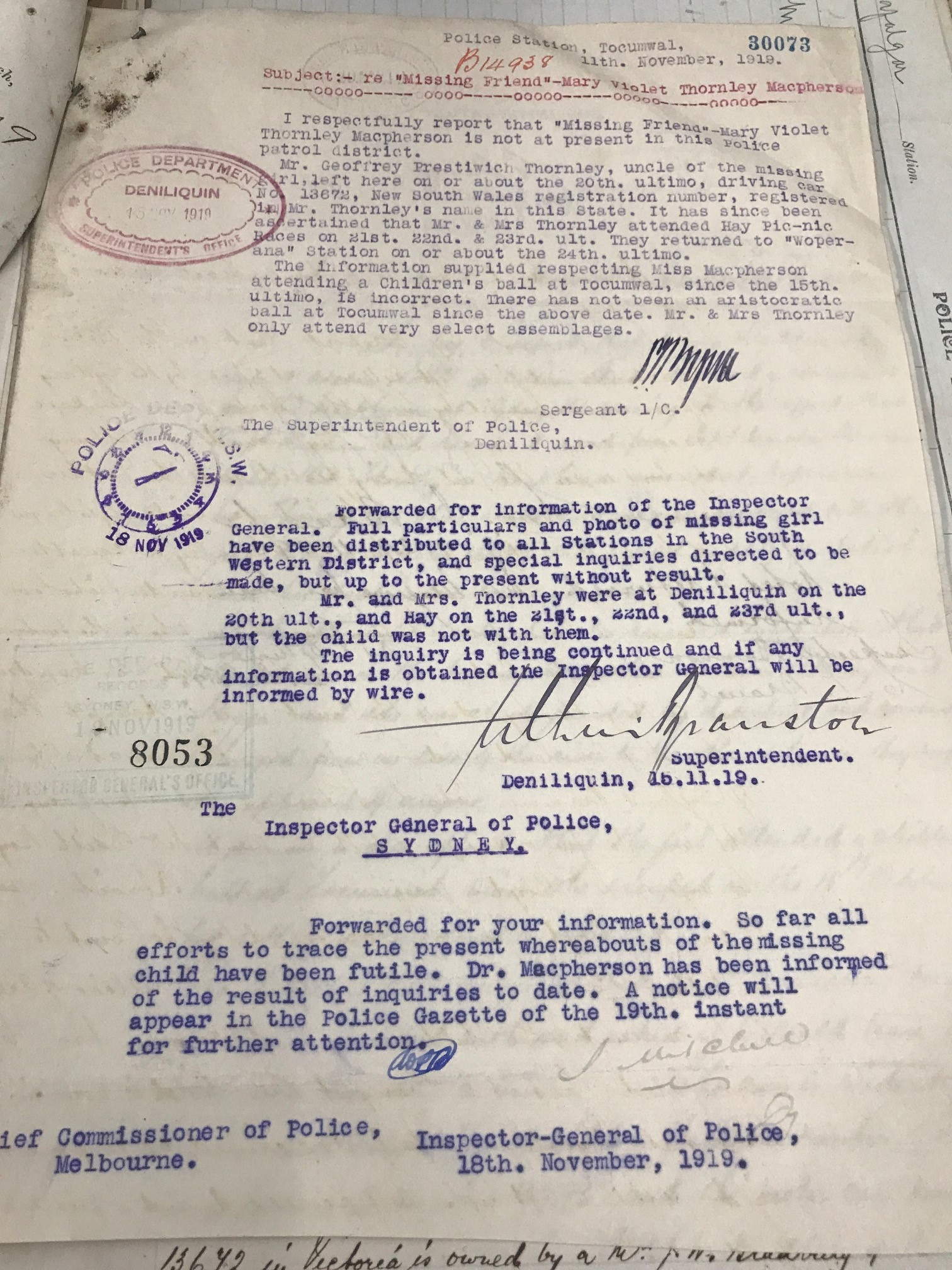 The public followed the tale of the missing girl in the newspapers.

And according to papers in the years that followed it seemed she did in fact reside with, or at least remain in touch with, an aunt until she married Angus Roderick Urquhart in 1928.

Within the police correspondence  from 1934 you can find letters regarding mediums including this one by H.L. Williams from Norfolk Island. 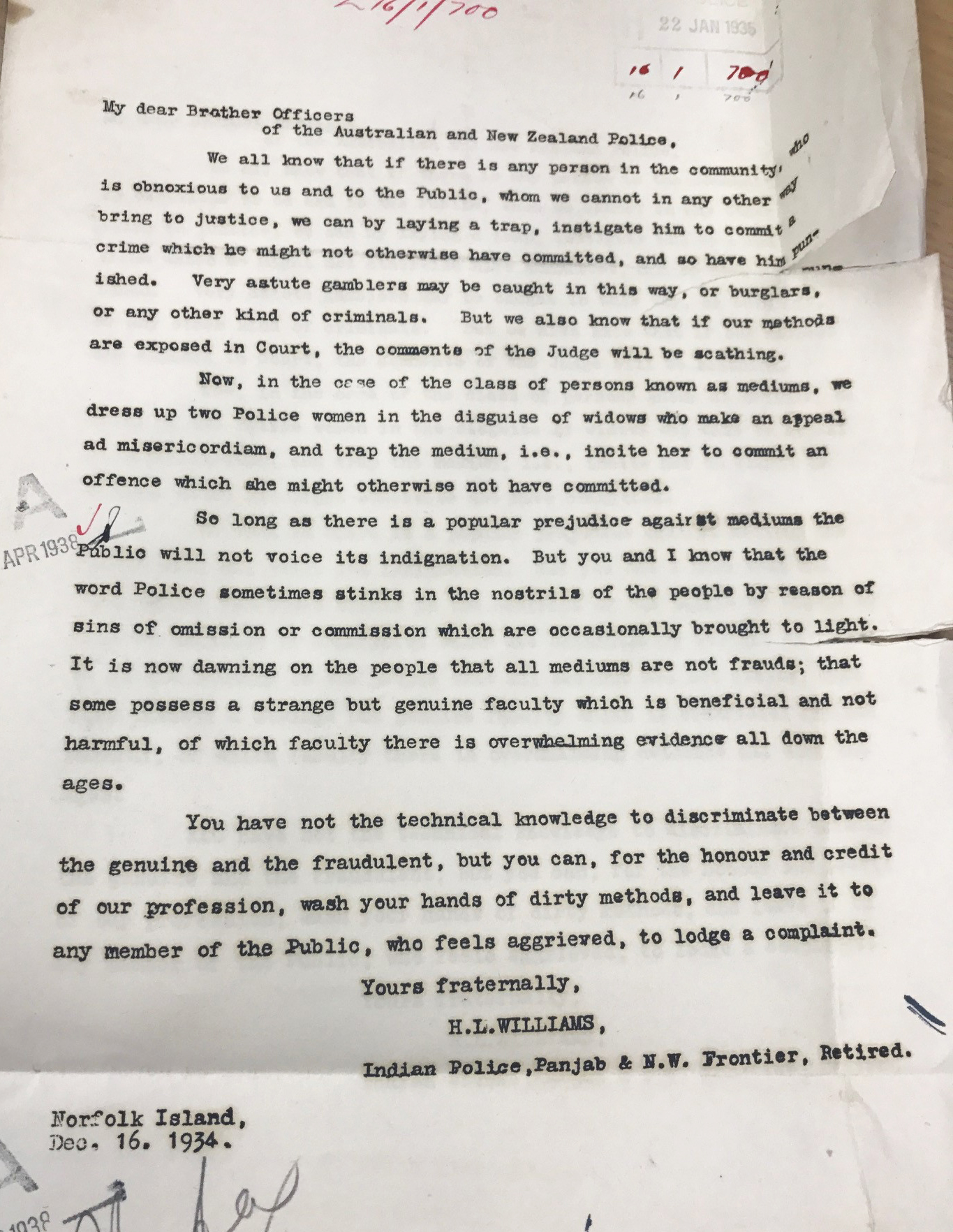 There is also an open letter to the editor of Melbourne Life Magazine in reference to an article. The letter states:

“Obviously, your journal is just and impartial in discussing any of the many and varied problems which engage human thought; but the article on “Mediums”, in your July number, cannot but be painful to any reader who favours fair and intelligent criticism. Mediums pertain to psychic science, the Queen of the Sciences, while few are willing to study and many to condemn unheard. The adverse critic will not even read the literature, because it is repugnant to him. In “Life” of the 1st December, 1928, I partially explained the psychological reason why. But let the writer of your article try to disprove two recent works, Dennis Bradley’s “Wisdom of the Gods” and J. Arthur Findlay’s “On the Edge of the Etheric.” He cannot do it. Both books are inexpungable fortresses of Fact. Against facts supported by proof and evidence which will submit to the most rigid judicial tests, dialectical argument proves nothing but the bias of the debater. If you cannot disprove what is contained in those books, then the medium is vindicated. Charlatans and others mentioned by the writer of the article are not mediums.”

Note, part of the series is indexed within VPRS 10257.

You can also find Police correspondence from 1853-1920 within series VPRS 937. Visit the relevant topic page on this series for more information.