From the Bendigo Regional Archives Centre

The former Bendigo City Council's Maps and Plans collection is probably the most eclectic series held at the Bendigo Regional Archives Centre (BRAC). The collection is stored in a combination of 52 archival plan boxes and loose bundles and spans the period 1867 to 1970s. Here are just two examples of what you can find within the collection:

Bundles 5 and 12 of the collection contain numerous examples of applications to construct, alter or make additions to numerous local houses and businesses. For the present day owner, these plans would be a goldmine of information - such as the date the application was submitted, owner at that time, original house floor plan (if new/or showing proposed alterations), type of addition or alteration; and the builder/architect’s name was sometimes recorded on the plan too.

Mrs. Kingsley’s 2 September 1915 plan for an extension to her house at the corner of Lily and Rowan Streets is a wonderful example (permit no. 238). Presented in various bright colours, individual rooms are labelled - dining/drawing/2 bedrooms/kitchen/bathroom plus front and back verandahs - four fireplaces in the main rooms, and one in the kitchen.

While there are no surviving records of permits granted for such works, Bendigo Council Rate books tell us that Ann Kingsley owned this house in 1915 and was renting it out; her occupation was listed as “H.duties”. The land and house had a NAV of £12. The following year, it rose substantially to an £18 NAV, showing that the work applied for on our plan had been undertaken.

Any later permits for house (or building) construction, alterations, additions, or demolition between 1924-1969 are captured in the five volume series of Bendigo Council Building Registers held at BRAC. Here, the owner and builder’s names, and the property’s address, are recorded as well as the type of work applied for (sometimes as simple as a fence being built), and sometimes the square feet being constructed or added to an existing house or building. 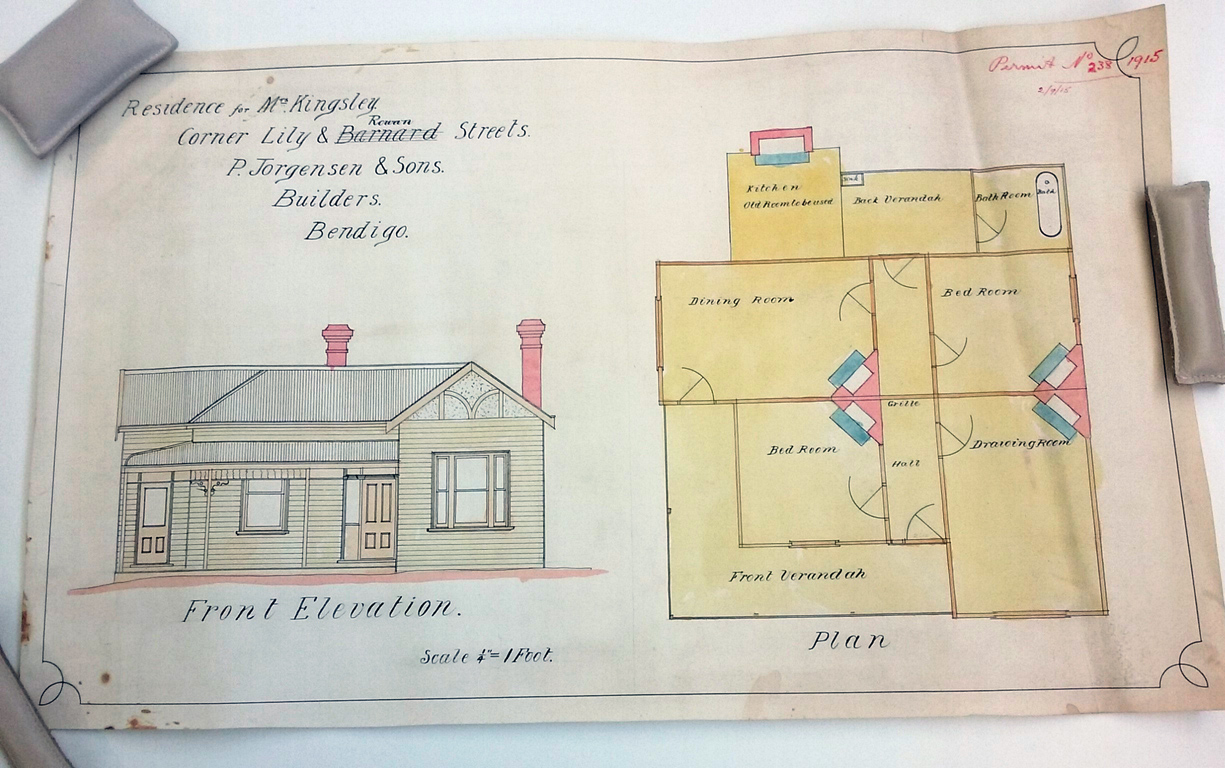 Looking at the early plan for the city’s Municipal Baths shows both humour and sexual divides of the times c. 1911-12 (Bundle 20). “Ladies only” (middle) and “Men only” (bottom left) swimming areas plus the beautifully named “Paddling Paddock for Young children” in the top right hand corner. These utilised existing dams in Rosalind Park, and were officially opened on 26 Feb. 1913; they had cost £2000.

“are, it is agreed, the finest open baths in Australia, and they should also be a source of interest to the returning “prodigal”.” (ie. returning, disabled soldiers.)

High praise for a facility with a mud bottom!!

Golden Square’s outdoor baths officially opened on 2 Feb 1918. They differed to Bendigo’s because they were the first to permit “mixed bathing” according to the Bendigo Independent. These particular Baths had been a very long time coming!! Our Petitions’ collection shows that from as early as October 1883 the citizens of Golden Square had begged the Council for their own baths to be constructed. A 19 Dec 1895 petition to Council objected to:

“£4000 [spent] on Baths in Upper Reserve before complying with Golden Sq requisites which has been promised for the last 12 years and £600 placed on the [Council] estimates for same.”

This also shows us that 19th Bendigo Baths existed prior to the one planned for in this image in the city ie “Upper Reserve” was the top section of our Rosalind Park. Other suburbs’ swimming facilities came much later. In 1958 the Municipal Baths were replaced by our Olympic Pool and £17,000 was raised by public subscription towards this pool’s construction. Today our “Aquatic Centre” is state-of-the-art, filtered water, four pools of differing depths, sun shades and landscaping. We’ve come a long way! 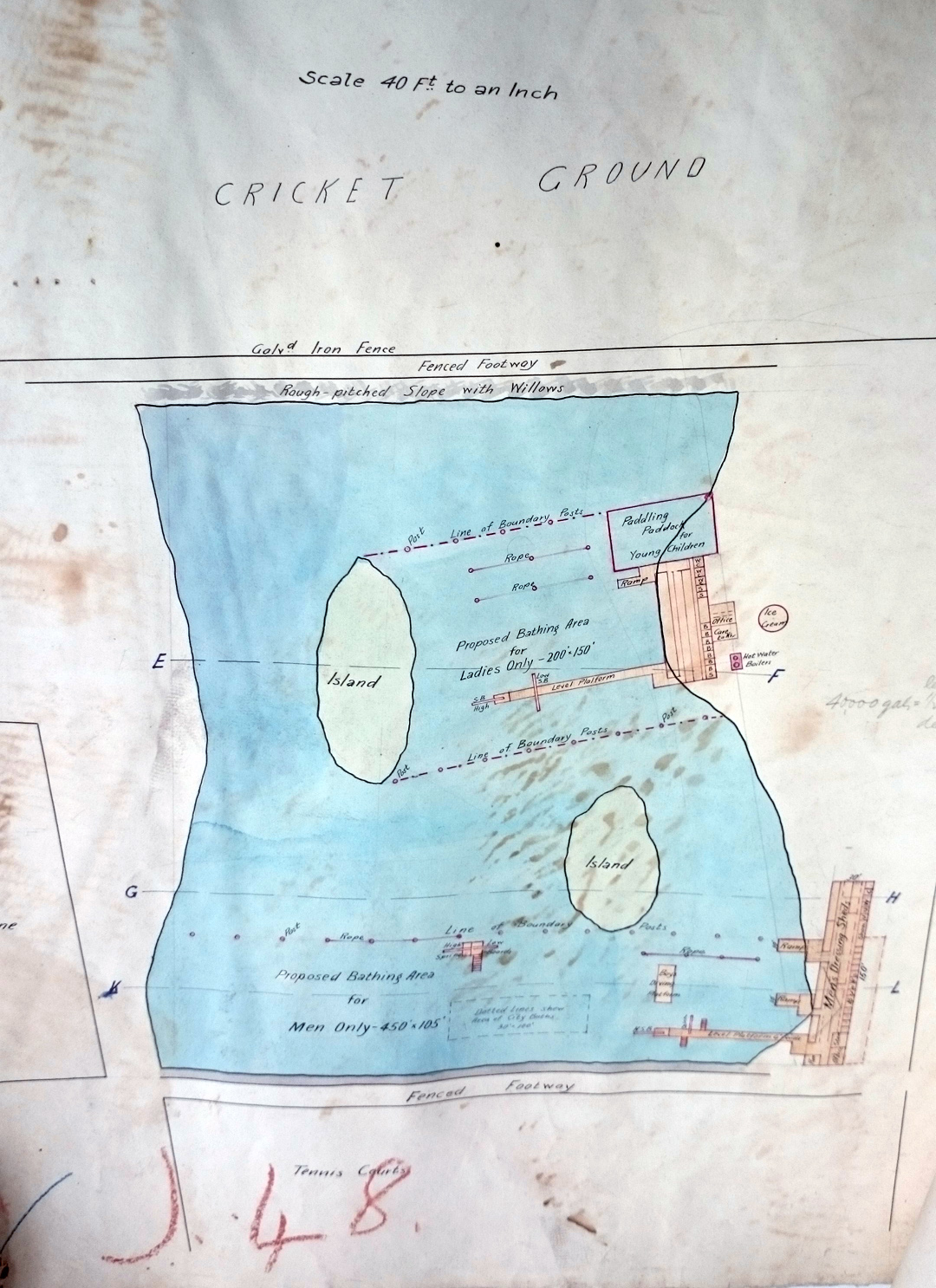 These examples were included as part of a presentation given at the State Library Victoria's Family History Feast Day. You can view the full presentation online.

Scroll to 03:47:00. Or watch from the beginning to see presentations from the Aboriginal Cultural Centre at Museums Victoria, the National Archives of Australia, La Trobe University, the State Library and PROV's own Charlie Farrugia who gave a talk on land records held at the State Archives.