Do we belong here?

Historian Graeme Davison delivered the speech 'Do we belong here? Reflections on family, locality and community' at the 2017 Victorian Community History Awards held at the Arts Centre on the 16th of October for History Week. He shares his speech with us here: 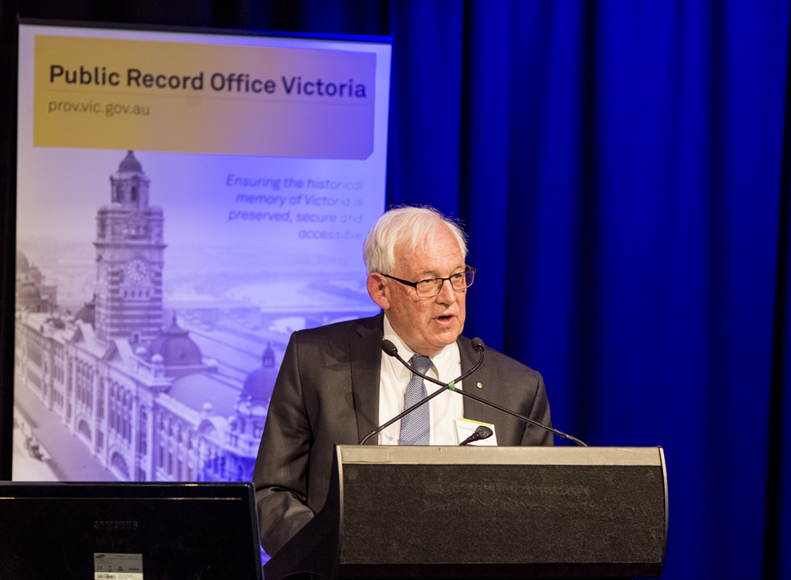 Do we belong here?

‘Do we belong here?’ The questioner was the famous historian, the late Manning Clark. Not the bearded prophet of his mature years, but a clean-shaven young apprentice-historian recently returned from Oxford. When he posed his question in 1943 he was newly married with a young child, had been found unfit for military service, and was marking time, rather unhappily, as a history teacher at Geelong Grammar. In an essay, entitled ‘A Letter to Tom Collins’ published in the new literary magazine Meanjin, he voiced the frustrations of his personal situation as well as his anxieties about Australia’s future.

‘Civilisation with us is artificial’, he wrote. ‘We must ask the dreadful question: Do we belong here?’

For a long while, we Australians were exiles, second-hand Europeans living on an alien shore. Even in my own childhood older members of my family still called England ‘Home’. Clark knew that he did not belong there, in the England he had so recently left. Nor did he feel at home at Geelong Grammar, an Australian replica of an English public school. His family links with Australia went back to the earliest years of British settlement through his famous ancestor, the parson Samuel Marsden, but his question was not just a personal one. Like many of his generation, he felt suspended between two worlds. Australian history, to the extent that it was studied at all, was a footnote to the history of Empire.

When Clark called Australian civilization ‘artificial’, however, he was comparing it, not just with the ancient civilisations of Europe, but with the culture of the people the European settlers had dispossessed. He was asking ‘Do we – we European Australians– belong here?’ In his published essay he denied any suggestion that Australia still belonged to the Aborigines, but in his diary he confessed that the history of their dispossession still haunted him.

In 1943 nobody knew quite how deep was the Aboriginal past. Only twenty years later did one of Clark’s students, the archaeologist John Mulvaney, complete a dig at Fromm’s Landing on the Murray that demonstrated, for the first time, that it stretched far back before the last Ice Age, about 15,000 years. Now, when we ask the question ‘Do we belong here?’ we inevitably think of the people whose history goes back 50,000 years and whose spiritual connections to their country challenge us to a radical rethinking of our own.

As I grew up, and even after I first began to write about the history of Melbourne, I was almost blind to the Aboriginal past. As a boy, I played in Lincoln Park, an untidy five-acre triangle of land bounded by pines and eucalypts close to my home in Essendon. Just recently I discovered, thanks to an article by Fred Cahir in the Victorian Historical Journal, that Lincoln Park was once a ceremonial meeting place for the Wauthurong and Dja-Dja-Wurrung people. There they gathered yams and built bonfires in preparation for their dancing. We children had no idea, as we romped in the darkness around our Empire Day bonfires, that we were dancing in the footsteps of a people who had gathered there, probably, from time immemorial. When I last looked, there was no plaque or memorial to remind a passer-by of that forgotten phase of Essendon’s past. Surely there should be one.

The politics of plaques and monuments are once again in the news. There have been appeals on behalf of Indigenous Australians to correct or delete the historically inaccurate or offensive inscriptions on some monuments, like the statue of Captain Cook in Sydney, and those of other dead white males. Some even suggest that we should remove the monuments altogether. Perhaps the cairns erected by the founders of the Royal Historical Society to mark the routes of explorers across the Victorian countryside will be slated for demolition. Once the underground rail loop is finished, Burke and Wills, some propose, should be banished from their place of honour opposite the Town Hall to some out-of-the-way location. I’m all in favour of new memorials, and of supplementing old ones, where necessary, with more accurate or complete inscriptions; but I would be sorry to see the destruction or removal of the old ones, even when they embody a discredited view of the past. They are signposts in our evolving understanding of the past, appropriate sites for instruction, self-examination and reflection. Remove them and we risk losing our bearings.

Sometimes, on a sunny day, I cycle along the lovely river Yarra trail through Heidelberg. I often pause to take in the view across a billabong towards Banyule, the Gothic homestead erected by the overlander Joseph Hawden in 1842, just a few years after he had seized the land from the Wurundjeri. In conjuring up the romantic image an English squire, Hawden sought to legitimate that recent history of dispossession. Near where I stop, the council has now erected a sign reminding us that the ‘high hill’ on which the homestead stands, and from which the name ‘Banyule’ derives, is part of the ‘Heartland of the Wurundjeri willam, or white tree dwellers’ and the billabong was one of their favourite fishing places. I know few other places around Melbourne where the clash between settler and Indigenous is so dramatically visible in the landscape. It is a beautiful, but also an uncomfortable, place. Do we belong there? I don’t know; but in pondering its lessons we are surely brought a step closer.

We are here, today, to honour some of our fellow Victorians who have given their own fresh, insightful answers to Clark’s dreadful question. We live in a restless, mobile suburban society, and our lives are divided between the scattered places where we work, live and play. In a globalised world, the ties that connect us to family, place and community may become so frayed that we wonder whether we belong, or are just birds of passage. That’s why history is so important: it reinforces the ties that bind us to the land and to each other.

Two years ago, I was thrilled to receive a Victorian Community History Award for my book Lost Relations: Fortunes of my family in Australia’s Golden Age. Although I am a professional historian, I had long avoided family history until, stimulated by a visit from my sister who has lived in England for many years, I led a little expedition of partners, cousins and children to our ancestral home on Wesley Hill, near Castlemaine. There we inspected the odd little house built by my great-great grandfather, the carpenter Robert Hewett in 1857 and visited the graves of Robert and his wife Elizabeth, an impoverished London needlewoman, in the Campbell’s Creek cemetery.

Family history is the most popular gateway to Australian history. When Australians are asked when they feel most connected to the past, they are likely to speak, first of all, about their family past: about looking at family photograph albums, at the name of an ancestor on a local war memorial, or at the epitaph in a country churchyard. The digital revolution has transformed genealogy, bringing the world’s archives and libraries to our desktops. Yet, as I note in my book, the excitement of connecting with kin, living and dead, in cyberspace, cannot replace the experience of knowing and seeing the places they inhabited or of finding their traces in the ink, paper and stone of past eras.

‘When we pause by the grave of a forebear, or recover a fragment of their everyday lives’, I suggested, ‘we are engaged in something akin to what Aboriginal people do when they go ‘Back to Country’.

Family history and local history are inextricably connected. Only when we place the family story in its local or community setting do we truly understand it. Only when we walk in the paths of our ancestors, do we begin to feel that we belong. So, sorry Ancestry.com, it’s not just your fingers but also your feet; not just your software but your boots and rainwear that you need when you do family history.

When we ask the question ‘Do I belong here?’ we join a long conversation in Western societies. Is our sense of belonging to our community or nation based on an age-old ancestral connection to the land, as the German Romantics believed? Or is it based on our living connections with each other as neighbours, friends, and fellow citizens, as the French and American Republicans believed? Some years ago the historian Patrick O’Farrell suggested substituting the term ‘community history’ for the older term ‘local history’. He recognised that, in a fast-changing urban society, community is not necessarily just local - and that was before social media drew us into a myriad of communities, virtual as well as geographical.

Some people now question whether community – in the sense of an intimate, bounded, face-to face community – exists any more. Often, it seems to me, community is a bit like a sleeping dog, apparently dead to the world until something comes along to stir it into action – perhaps an unwelcome freeway development, the demolition of a familiar landmark, an attack on a precious piece of parkland or the threat to a loved community institution. Community, the American historian Thomas Bender writes, is more like a happening than a place. In writing, re-enacting, commemorating and defending our history, community comes alive in the present. The books and projects we honour today attest to the strength of this vital link between past and present. They are vivid, heart-warming, thought-provoking, affirmative answers to Manning Clark’s ‘dreadful question’. Yes, they say, we do belong here.

This talk draws on several previous publications: The Use and Abuse of Australian History (2000), chapter 11 Community; ‘Rethinking the Australian Legend’, Australian Historical Studies, 43/3, 2012; Lost Relations: The Fortunes of My Family in Australia’s Golden Age (2015) and The City Dreamers: The Urban Imagination in Australia (2016), Afterword City Dreaming. Fred Cahir’s article is in Victorian Historical Journal, 14/85, 2014 and Thomas Bender’s idea of community in his Community and Social Change in America (1978). 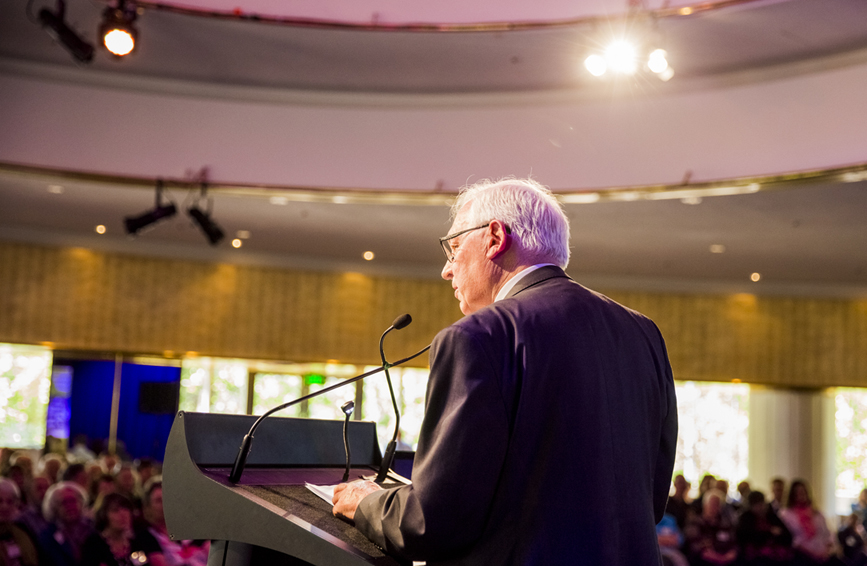 Graeme Davison, Emeritus Professor of History at Monash University, is a historian and author who has researched and reflected on the history of Australian cities for 40 years. He is Australia's best-known urban historian and a commentator on contemporary  urban issues. Graeme's prize-winning books include The Rise and Fall of Marvellous Melbourne and Car Wars: How the Car Won our Hearts and Conquered our Cities. In 2015 he won the Victorian Community History Award Judges' Special Prize for his book Lost Relations.