“This book should be kept in an honoured place as a source of guidance and inspiration for successive generations.” Introduction, Education Department's Record of War Service. 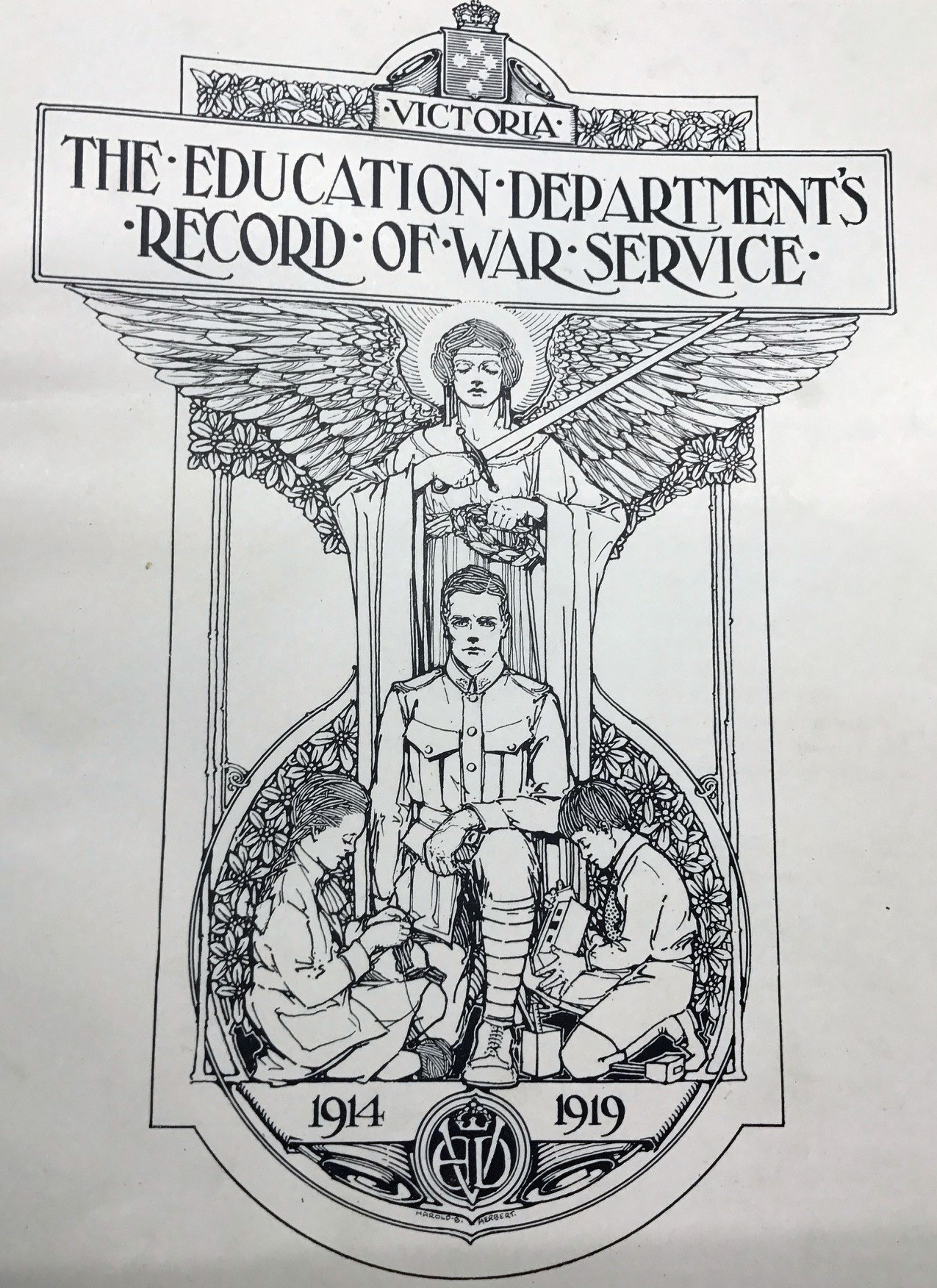 The Education Department’s Record of War Service Victoria 1914-1919 details the men who enlisted, the men who fell, inspectors, teachers and other departmental officers whose sons or brothers died in service, the men who returned, honours and decorations, the men who volunteered who were rejected, and memorials. The book also includes information on the formation of the education department’s war relief organisation, the supply of comforts for soldiers, how the town and country schools helped, the league of young gardeners, helping the hospitals at home, war-savings effort, and statement of receipts and expenditure. 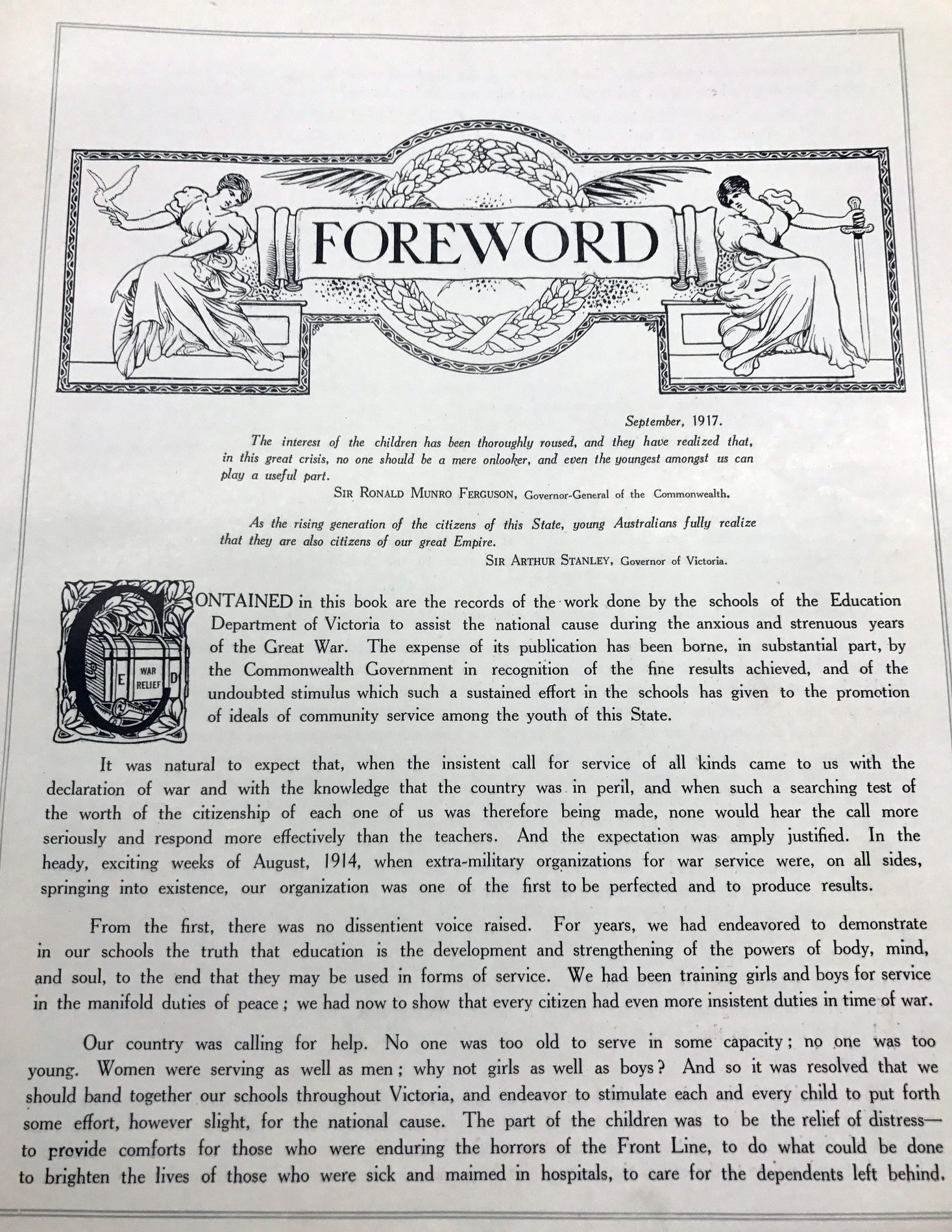 The supply of comforts for soldiers

Featured in the book is information about the establishment of a central depot for receipt and dispatch of material for special garments and other comforts for the soldiers. The depot was set up at the Montague Street School in South Melbourne. Boys would carry parcels to the railway station for dispatch, free of charge thanks to the courtesy of the Railway Commissioners, all around Victoria. The materials were made into socks, caps, gloves, shirts and handkerchiefs by busy teachers and students at the schools, and mothers and grandmothers at home. Female teachers met regularly at the education office to cut out patterns for inclusion in the parcels sent out to schools.

The first shipment of goods to the war front consisted of 12,500 articles of clothing, 1000 books and magazines, as well as tobacco, hospital foods and soap. Soldiers sent the school children grateful letters in reply. 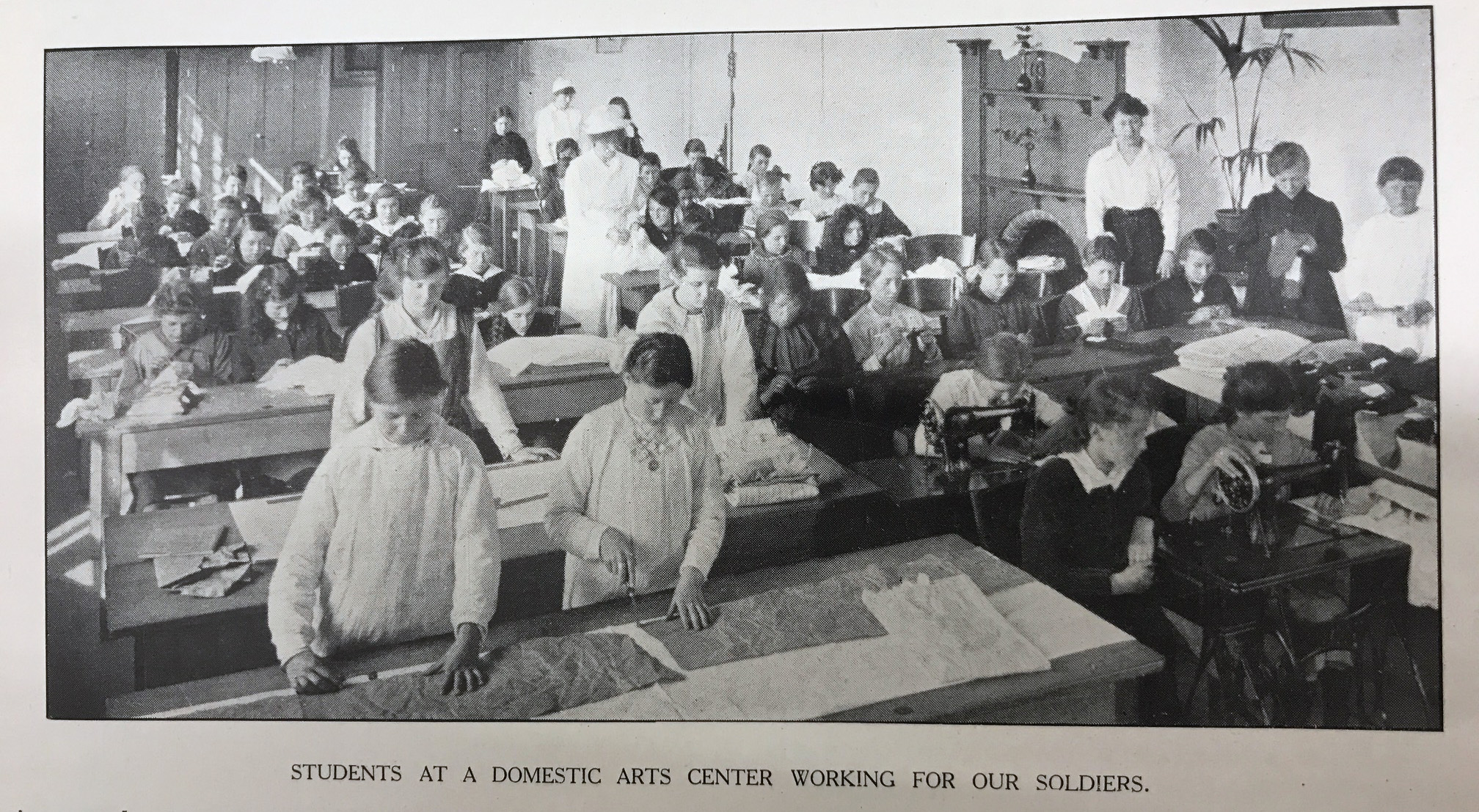 Throughout the book you will find portraits and one paragraph biographies of the men who fell and the men who returned. Of the men who fell, 122 were teachers in elementary schools, 13 in high schools, six were students-in-training, three teachers in technical schools, one was a member of the clerical staff of the education office, and one a messenger at Melbourne High School, 16 were ex-teachers. 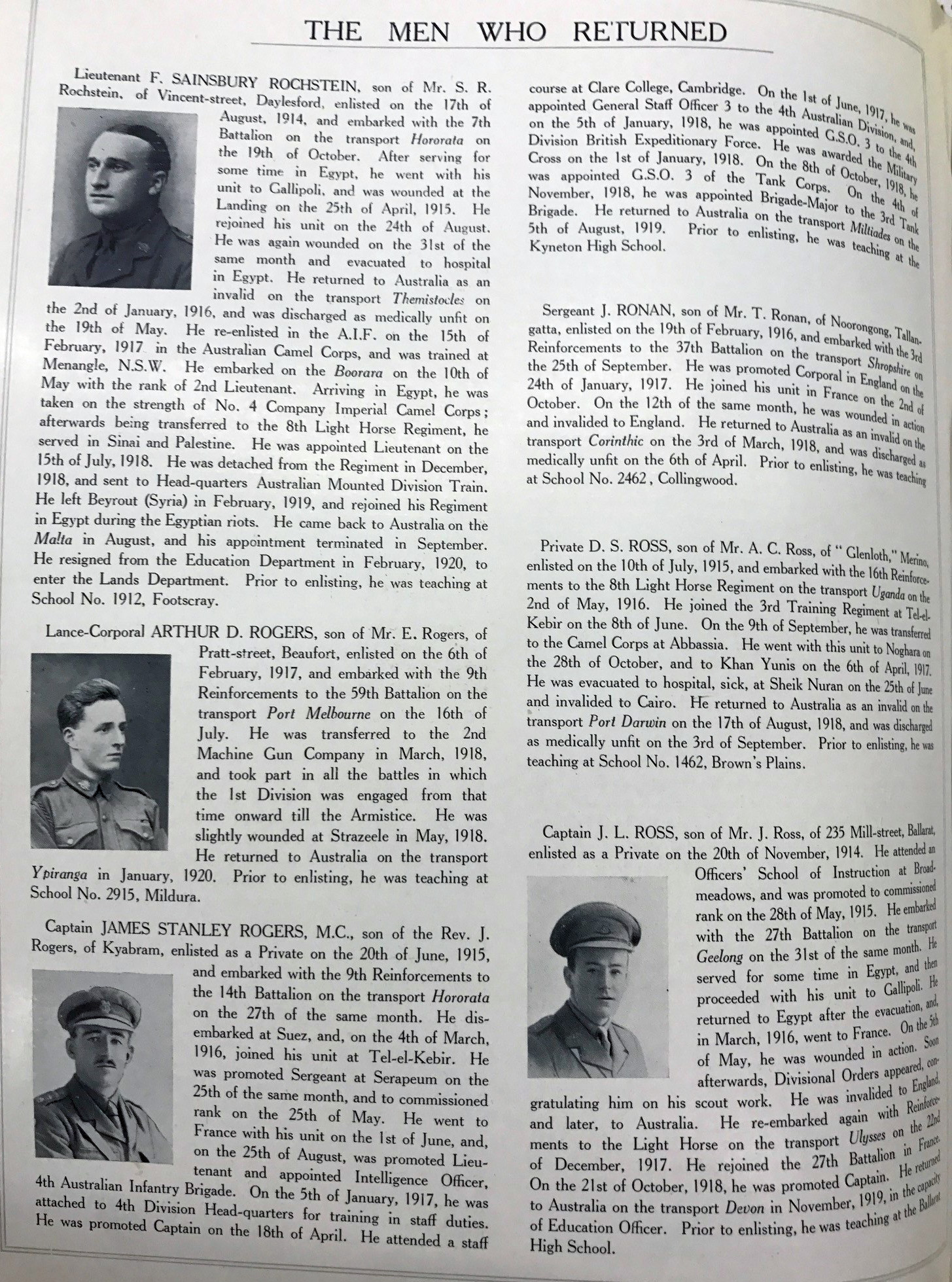 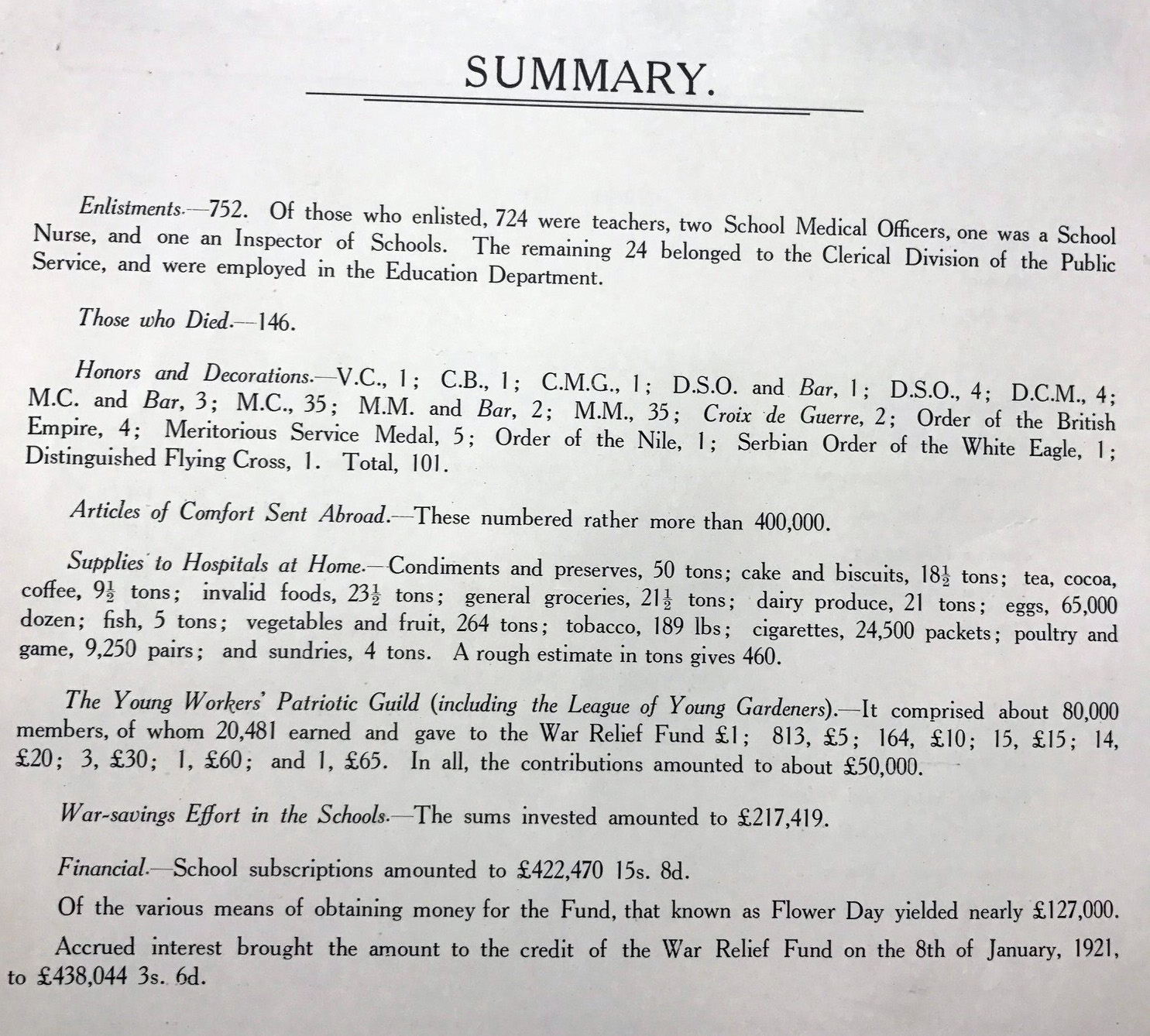 This record can be viewed at the North Melbourne Reading Room by ordering VPRS 14390 P1 Unit 1. In the same unit you will find the War Record Service Book for 1939-1945 which also includes photos and biographies of soldiers from the Second World War:

“Shortly after the First World War there was published The Education Department’s Record of War Service – a book that has an honoured place in all our schools. I am sure that the story it told was an inspiration to many who passed through those schools in the years before the outbreak of the Second World War in 1939. This book is the record of the part played by the teachers and children in our schools during the Second World War of 1939-1945… It tells the story of the schools’ war effort in those critical years when war came very close to our shores and when everyone – man, woman, or child – was called on to bear a share of the war effort.” Introduction, Education Department's Record of War Service.