This year's Remembrance Day marks one hundred years of the signed Armistice to end the First World War.

After accepting the terms presented by General Foch of the French army, the Germans signed an armistice bringing an end to the War. The armistice came into effect at 11am on 11 November 1918.

This day was originally called Armistice Day in Australia in recognition of the signed agreement. At the end of World War II in 1945, the Australian and British governments changed the name to Remembrance Day to commemorate the fallen of all wars and conflicts. In October 1997, Governor-General Sir William Deane broadened the scope of the official commemorative nature of Remembrance Day by urging all Australians to remember the sacrifices not only of those who had died but also those who had otherwise suffered in Australia’s cause in wars and war-like conflicts.

Commemorating the Centenary of WWI

The 11th of November 2018 also signals the end of the ANZAC Centenary commemorations. As part of the ANZAC Centenary, there have been many projects undertaken by government, councils, community groups, historians and museums across Australia. At the Victorian Archives Centre, we contributed to this assembly of history with two significant digitisation projects. The first was a Public Record Office Victoria project entitled Battle to Farm and the second project run by the National Archives, Discovering ANZACs. We also hosted an exhibition at the Old Treasury Building and awarded other impressive Victorian projects through the Victorian Community History Awards. 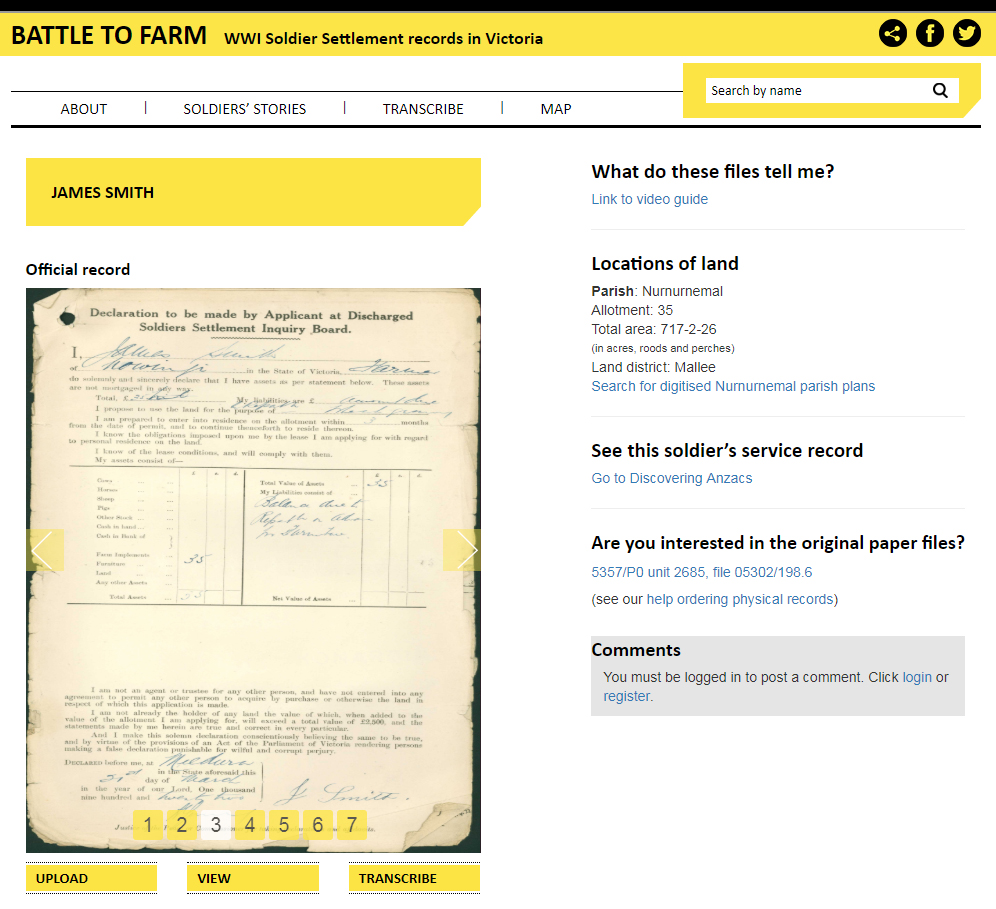 Over the years there has been great debate as to the success or failure of the soldier settlement scheme as ex-soldiers were entering farming life in a difficult economic climate as the world descended into the Depression. Over 50 per cent of the soldiers that were allocated blocks left the scheme. Many were unable to cover their debts when food prices plummeted, while others accused the government of leasing blocks that were too small or not suitable for farming.

Through the digitised resources, we can see not only the land allocated to each settler, but the hardships they faced. Searchable by soldier name and geographic location, the website features digitised soldier settlement records, letters from the soldiers about their farming life, video interviews of people who grew up on settlement blocks, photographs, and a guide to understanding the records.

Featuring some of the records from this collection, among other personal stories and contributions, we also held an exhibition called Soldier On at Old Treasury Building, going into further detail about the Soldier Settlement Scheme and its impact on the people and development of Victoria.

Additionally, the website features files relating to the war experience both abroad and at home in Australia and New Zealand:
•    selected copyright and design records
•    selected correspondence from departments such Defence, Security and Intelligence
•    correspondence from Australian wartime governors-general
•    Acts of Parliament, letters, protest material and clippings on conscription
•    diaries and records of the Chief Censor.

A large selection of photographs from the National Archives and Archives New Zealand is also available, including images of battle sites, maps and strategic plans, personal photographic collections of significant people, as well as official photographs of some soldiers and most internees.

Many of the volunteers who assisted with the Battle to Farm digitisation were also involved in this project at the Victorian Archives Centre.

To acknowledge all of the incredible work of local community groups, councils, historical societies and historians, a special award category was introduced to the Victorian Community History Awards, which we host in partnership with the Royal Historical Society of Victoria. The projects that received the award over the course of the Centenary include:
•    Suburbs at War. The cities of Malvern and Prahran during the Great War, Helen Doyle, City of Stonnington
•    Home Front Ballarat WW1 Website, Ballarat & District Genealogical Society
•    To Paint a War: The Lives of the Australian Artists Who Painted the Great War 1914-1918 by Richard Travers
•    Lest We Forget: Southern Mitchell Shire Volunteers Who Served in World War One articles in the North Central Review newspaper by Grahame Thom and the Kilmore Historical Society

All of these projects, and the many others completed across Victoria, help to ensure that the memory of World War One and the contributions of those who fought and were affected by the war will not be forgotten. Their stories will be accessible to future generations to learn and commemorate, particularly on Remembrance Day each year.