The legacy of wartime propaganda Part 1

One hundred years ago, 112,000 Victorians enlisted in the Australian Imperial Force (AIF), 89,000 served overseas and 19,000 would tragically lose their lives. This article takes us back in time through a selection of World War I propaganda materials located in the archive.

The final year of the war

It is early 1918 - three years since the first Australian troops were sent to Egypt to fight against the Ottoman Empire. While Russia withdrew from the war some months ago, the US has only just entered the conflict. One million German troops who were fighting Russian forces in Eastern Europe have been freed to launch an offensive at the Western front, soon to become a grim setting for unprecedented loss of life. Australian casualty figures stand at 76,836, and losses on both sides have been heavy and the gains very small. Numbers of Australian men volunteering to enlist have continued to fall.

On the home front, social division has grown. Amid continued British pressure, the government is determined to fill shortages in the Australian Imperial Forces as regiments are continuing to disband. Many Australians, however, are disillusioned with the rising casualty rates and stories of battle losses. Conscription referendums in 1916 and 1917 were significantly opposed and both failed. Some are calling for peace terms to be created but Allied leaders want to fight to the finish. They portray this as a war for the good of civilisation, whose existence and well-being is threatened by the malevolent German empire.

With the failure of the government to win the right to conscript soldiers, and the armed forces needing continual reinforcement to retain their strength, the government has decided to embark on a new campaign to mobilise Australians. It will include the release of a series of recruitment posters and pamphlets. 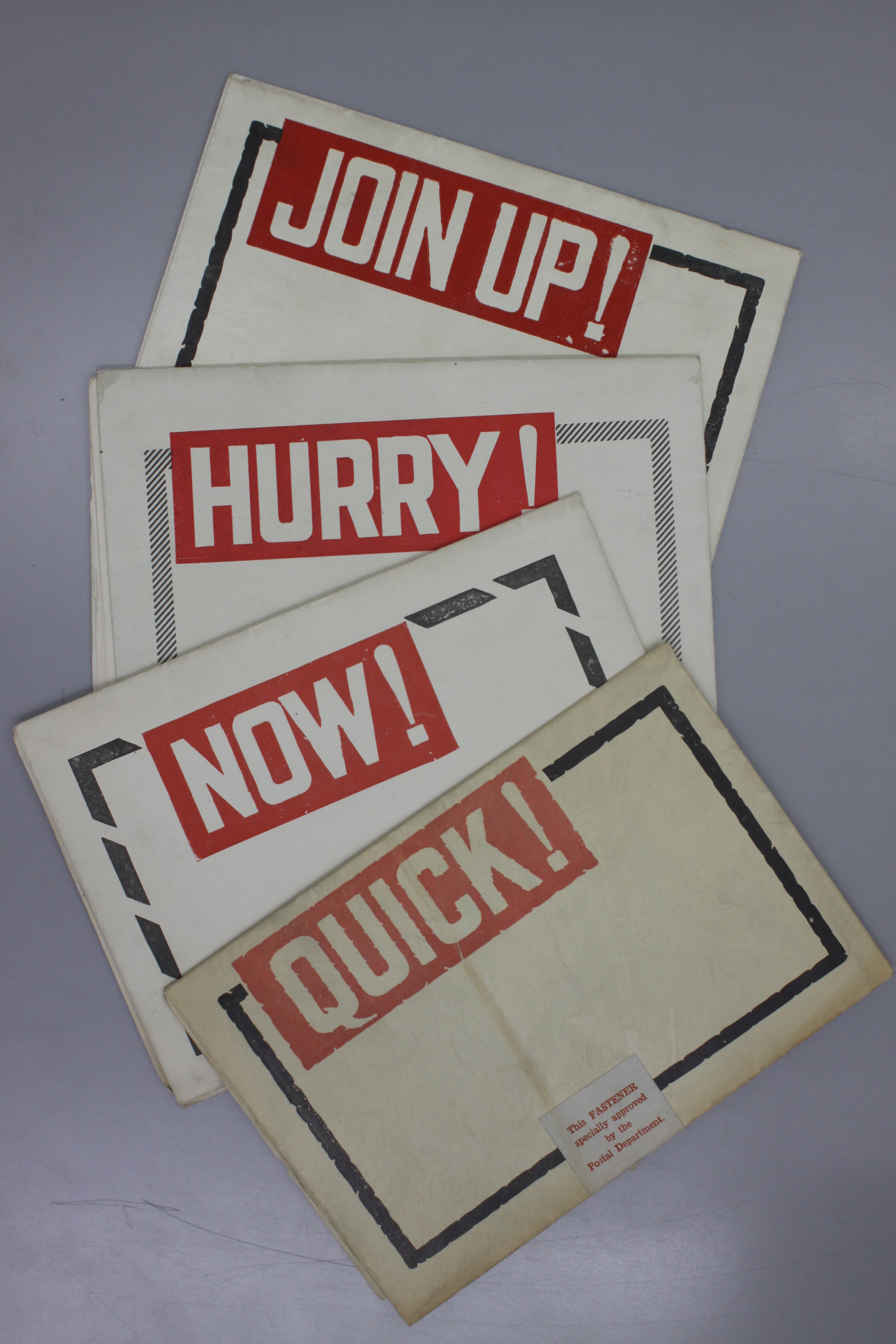 The posters of the last recruiting campaign of 1918 can be found in PROV’s collection, in a series from the Town Clerk's Office of the City of Melbourne – VPRS 3183/P0 Units 132 & 133. Illustrated by renowned Australian artist Norman Lindsay, many of the posters contain violent propaganda images to incite anger against the Germans, who are depicted as monstrous and bloodstained. The intention is to inspire and shock un-enlisted eligible men to join up. Looking at them, you can get a glimpse of the wartime propaganda that is so indicative of the time.

The recruitment pamphlets were compiled by the Australian government and published by the Director-General of Recruiting, Victoria Barracks. They were designed to be folded for posting to potential recruits. The fastenings of each read “Hurry!” “Join up!” “Quick!” and “Now!” According to the Australian War Memorial, the pamphlets were part of a recruitment kit to promote the little known “Voluntary Ballot Enlistment Scheme” – the Australian government’s final attempt to raise recruitment numbers. Men were to submit cards to a lottery and then agree to serve in the AIF if their names were drawn out. The first draw took place in Sydney on the 7th of October 1918. Most of the pamphlets would never have been distributed - the scheme was shut down with the signing of armistice on the 11th of November 1918, which ended the First World War. 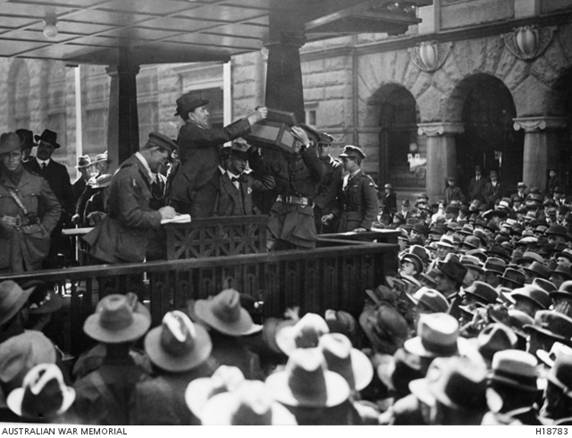 Minister of Recruiting, Mr Orchard, drawing a ballot for voluntary enlistment into the AIF. Letters and pamphlets were posted to eligible men; the government estimated this numbered 838,121 Australians. 100 badges were selected on the day – this would be the only draw conducted for the ballot scheme. (Source: Australian War Memorial, H18783). 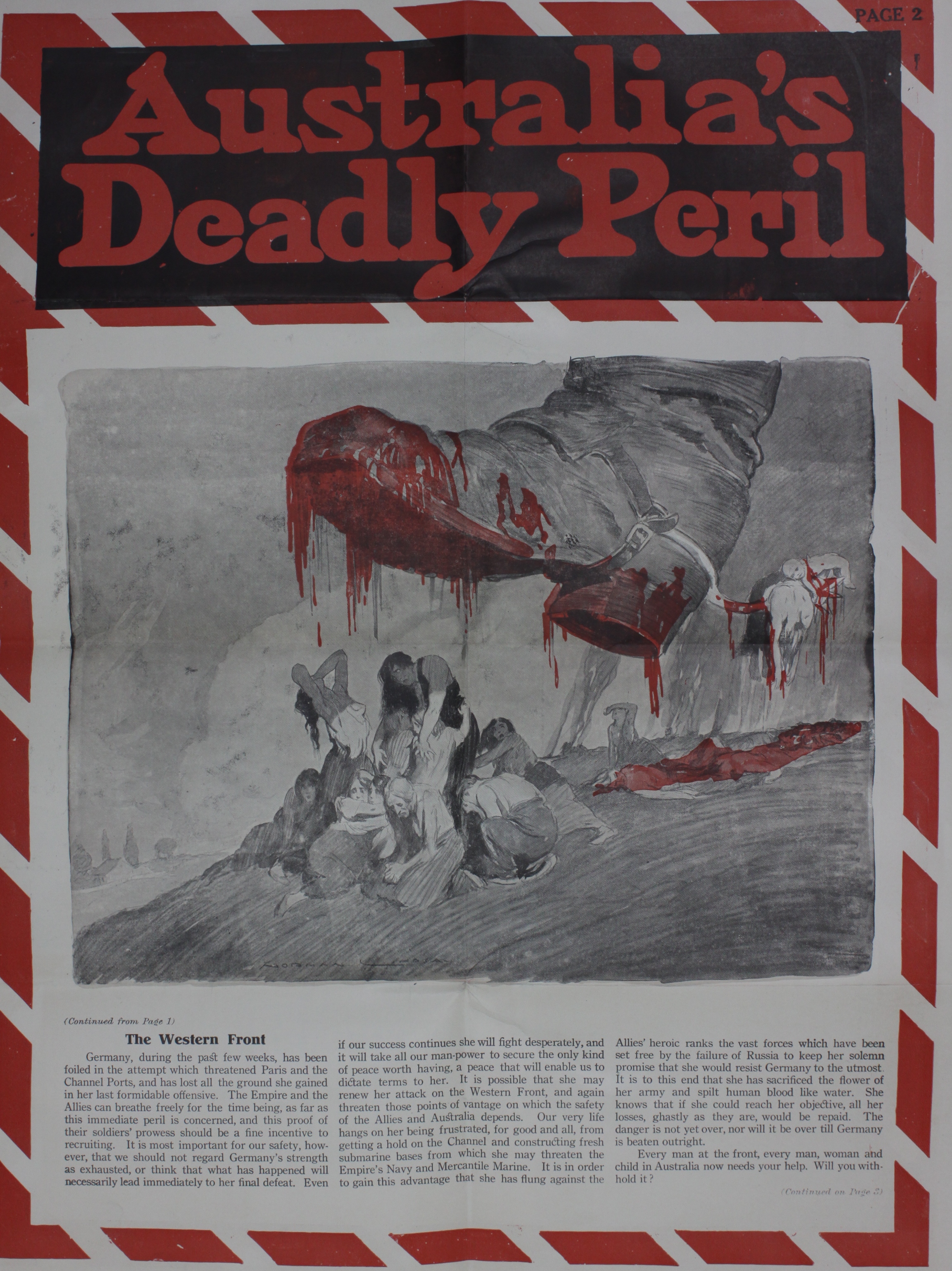 What can we see in the images? One motif that is referenced is that of the RMS Lusitania attack - one of the most controversial events of the First World War. The English passenger ship, travelling to London from New York, was hit by a German submarine in May 1915,  1,198 passengers and crew were killed. The death toll included 128 US citizens and the event is believed to have swayed American opinion, setting the path for US entry into the war. The sinking was exploited by propagandists as an unprovoked assault on a civilian ship but Germany insisted the Lusitania was carrying illegally stowed explosives. Whether or not there were any explosives on board is still debated today. 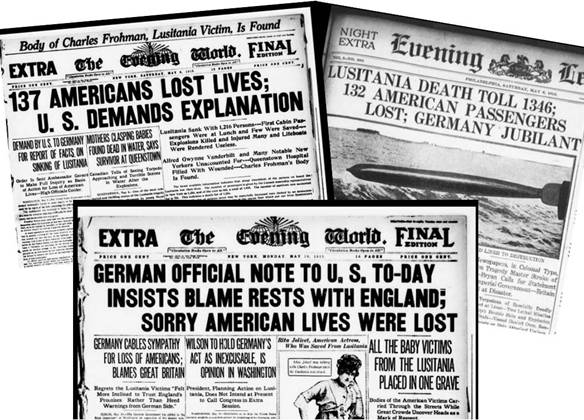 American headlines after the sinking of Lusitania 1915 (Source: Library of Congress Digital Collection).

A cartoon on one of the pamphlets from the Australian campaign depicts a German water demon drowning a mother and child – you can see the image of a sinking ship in the background. Innocent civilians are the victims in this imagery as the plight of the defenceless is used to incite outrage. 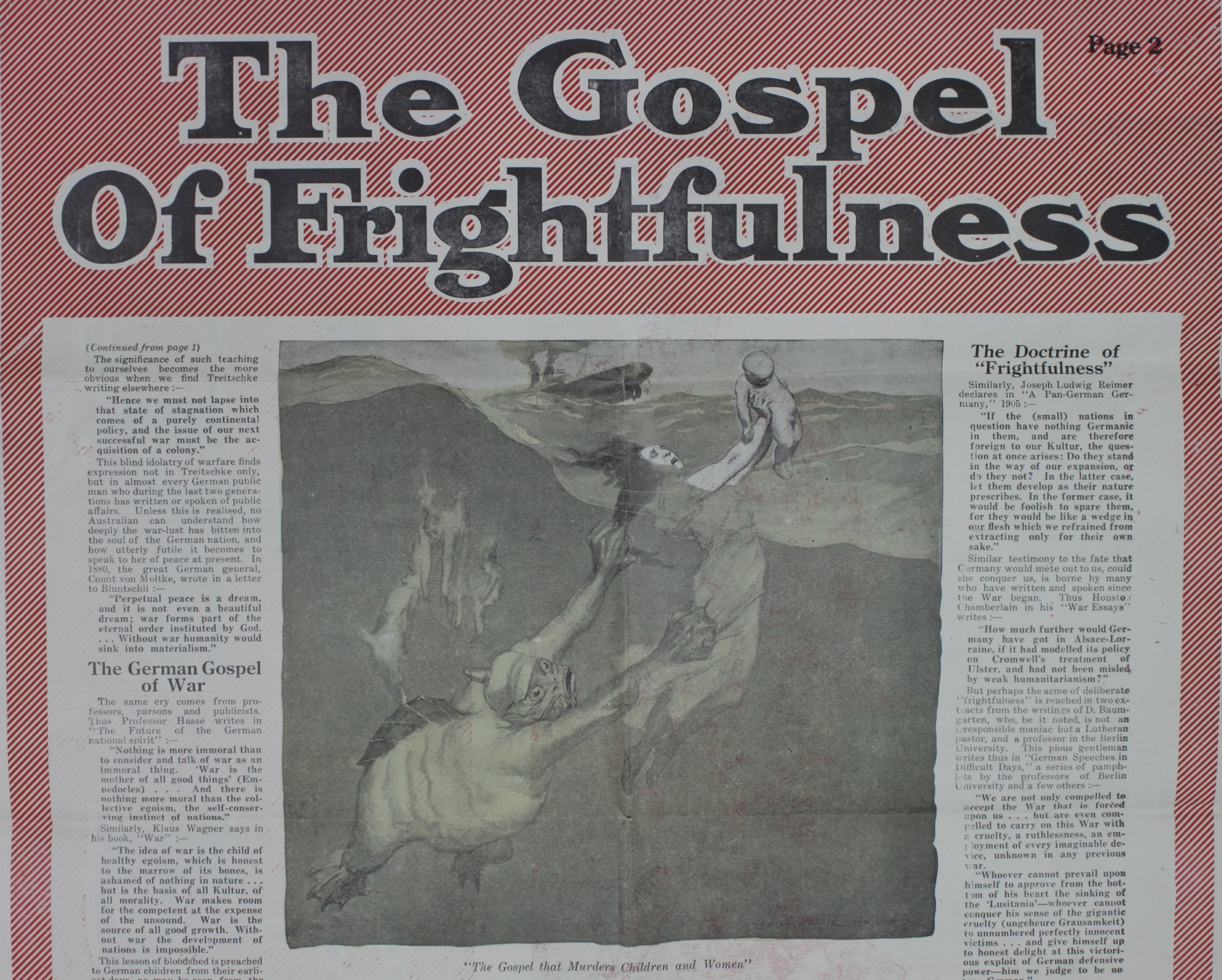 The invasion and occupation of Belgium by German forces in 1914 is also referenced many times in propaganda. Allegations of brutal atrocities committed by German troops promoted an image of the enemy as bloodthirsty and inhumane. One poster, titled “The Peril To Australia”, warns that similar events will happen in Australia, should Germany win the war. It shows a violent conquest of an Australian town by German troops. This was all designed to instil anxiety, panic and hatred for the enemy. It also provided a moral justification to go to war - to defeat a savage aggressor, which threatened the whole of civilization. 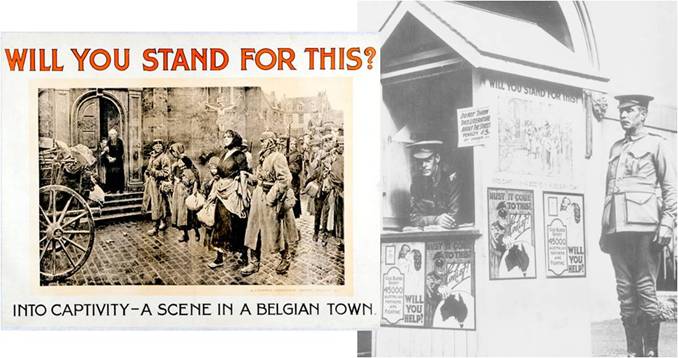 A recruitment booth in Brisbane circa 1916 covered with posters including the one to the left referencing Germany’s invasion of Belgium. (Source: Australian War Memorial, ARTV01335 & P02141.008). 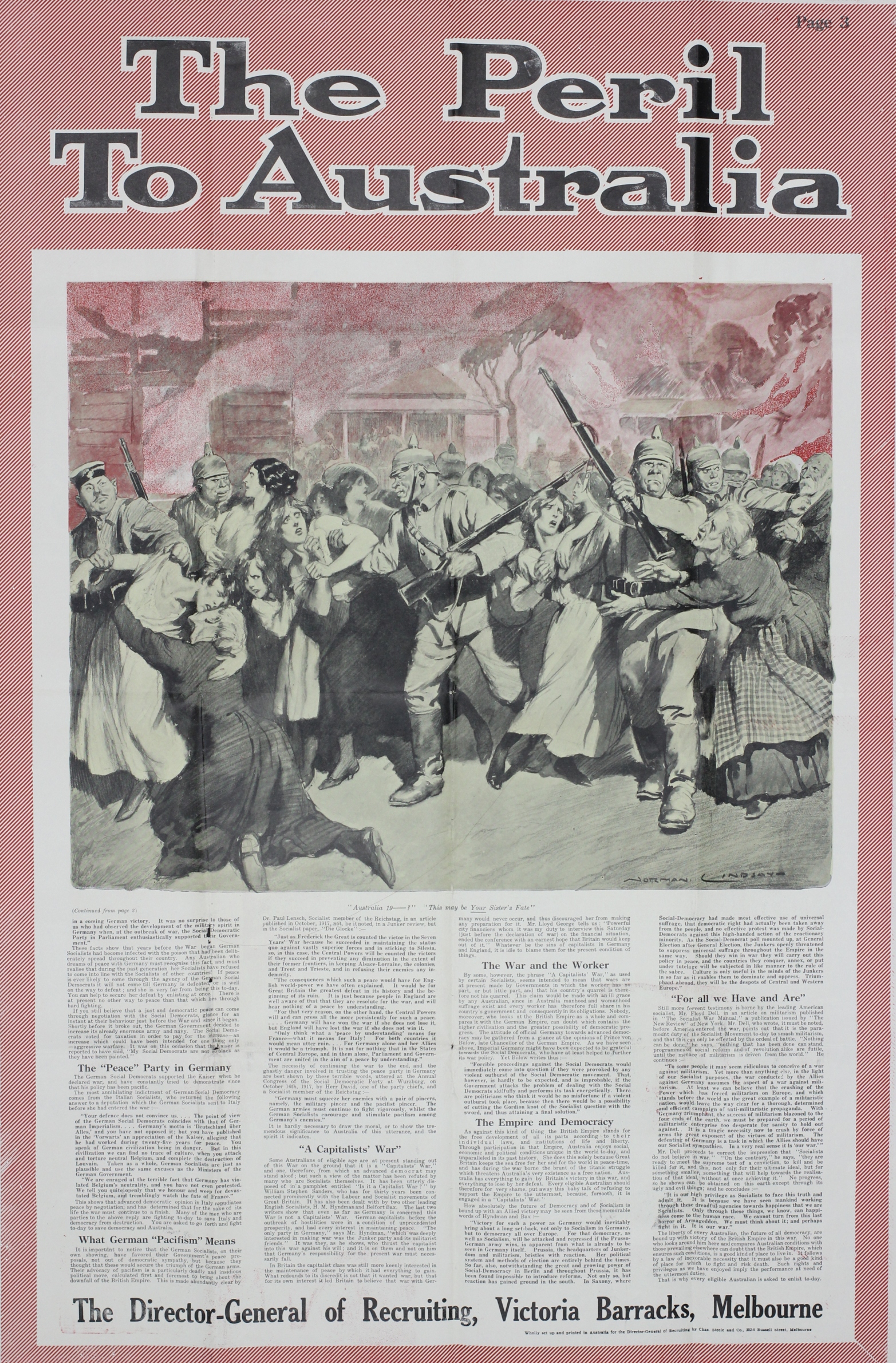 A battle between good and evil – peace terms couldn’t be created against an inhuman savage enemy VPRS 3183/P0 Unit 132.

The pamphlet text: “On the fields of France and Flanders is at present being decided the question whether your home will be polluted and outraged by the Hun, or whether it will be preserved from this unspeakable fate for ever. The men in the trenches are overworked and weary with incessant fighting. The glorious Army to which they belong is being frittered away for lack of the help you and your fellow eligibles can give. Will you not enlist at once and do your “bit” for the men who are risking everything for you?”

Check back in the coming weeks for Part 2: The long shadow of atrocity propaganda – a new WWI scholarship emerges.