Have you ever worked in an office? Do you remember your first office job? The constant ringing phones, the ever-present printing fax machine?

“My first job in 1987 used a telex machine to send messages internationally. We used to give the message to the MD’s PA as she was the only one allowed to type them in and send and receive them. When I left there to become a sales rep in 1992, we had pagers before mobile phones and had to find a phone booth to call the office when paged!” Jacqui Harvey, now the owner of Yarra Valley Gourmet Foods, remembers.

1987 was not so long ago and yet our office environments, in particular technology and supplies, have come a long way.

I worked briefly with Jacqui when I was in my first office job in 2007 and I remember some staff members still using fax machines. My mobile of choice at that time was the Nokia 3310 in sparkly red with pink charms dangling down the side – very professional! Other colleagues were using flip phones and Blackberrys by then.

“Technology has got a lot more compact and convenient. Whereas some equipment such as scanners and PABX systems used to take up whole rooms now they are much more a part of the overall office. My first office job was as basically a photocopy boy and the copier filled an entire wall. The original went into the middle of the contraption and the copies shot up on belts into a tower of output trays about 6 feet tall."

Photographs from the Melbourne Harbour Trust series in our collection reveal some of the office spaces and work products being used by Port of Melbourne Authority (PMA) employees at their Market Street offices in the 70s and 80s and World Trade Centre location from 1983. The photos show off an action style office layout of alternate working spaces dependent on job requirements. Large computers and phone handsets abound as do chunky calculators and typewriters, with one office stacked floor to ceiling with paper.

The photocopiers pictured are particularly large compared to some of the more compact styles you can buy today.

It’s almost hard to conceive of a time before photocopiers in the workplace. Each document requiring multiple copies would have to be written out by hand or typed out multiple times. Later came carbonless copy paper. It wasn’t until 1959 that Xerox came out with the 914 photocopier – the very first in the world. It was twenty years in the making resulting in a copy machine that took seven seconds to copy a sheet of paper. The sudden ease of copying caused a complete change in the way information moved around and between offices.

“The button waiting to be pushed, the whir of action, the neat reproduction dropping into the tray—all this adds up to a heady experience, and the neophyte operator of a copier feels an impulse to copy all the papers in his pockets,” John Brooks wrote in a 1967 New Yorker article.

It seems by the 1970s, copying was so integral in the PMA office that four machines were needed.

The first Remington typewriters went on the market in 1874 with standard features including the cylinder, line-spacing and carriage return mechanism and various other attributes that remained in typewriters built over a century later. The downside to the first typewriter? It only typed in capital letters. Nowadays when typing in capital letters people are likely to think you are VERY ANGRY WITH THEM. Not so back then! Electric type-writers came onto the market as office writing machines in 1920 with the ones pictured here in the 70s much more advanced for the work environment of the PMA.

In his book The Office, Gideon Haigh describes the impact of the typewriter on the office environment.

The computer soon replaced the old typewriters being used in the next set of photos.

The image below shows a PMA employee making adjustments to the building’s ICL 2900 Series mainframe, developed in the UK by ICL 1974 to 1980. The 2900 was ICL’s most successful line, running on the Virtual Machine Environment operating system. But once the likes of IBM started making easy to use personal computers, ICL saw a decline in sales and were eventually taken over by Fujitsu.

“It is too early as yet to say what the 2900’s place in computer history will be.” J.K Buckle in The ICL 2900 Series of the Macmillan Computer Science Series, 1978.

Below, a woman sits at a Lanier processor with two disc inputs on the right hand side of the machine and bright green symbols on the screen. According to a newspaper advertisement for the Lanier from 1983, it was a one-step word processor and computer with the following software options:

“The race was now on to put PC power at the fingertips of every worker,” says Gideon Haigh in The Office, “as the portal through which, increasingly, all work was done. Computers subsumed more and more functions: typewriter, calculator, filing cabinet, bin, diary, even telephone.”

You can now find a few of these Lanier computers available online through vintage sellers. Lanier products originally went by the name Harris/3M up until 1989 which tells us that this image can’t have been taken any earlier than that year. Lanier Worldwide is no longer in operation. It was acquired by Ricoh in 2007.

Another past colleague of mine, Philippa O’Halloran, recalls of her first office job when they got their first computers.

“The computers were Wangs in maybe 1986. We all had typing lessons so we could use them.”

The internet wouldn’t come to Australian offices until the 1990s.

Sometimes one phone just isn’t enough! We’re assuming this next photo was taken before the option of having different lines on the one handset – and back before voicemail, and when busy signals and ‘off the hook’ were common place. The phone sure has come a long way:

In 1965 Teri Pall invented the cordless.

In 1973 Marty Cooper made the first mobile phone call.

From then on it became all about the mobile. Though office landlines have continued, now many business calls happen on the mobile, employees no longer missing important calls every time they step away from their desk.

In 1992 Neil Papworth sent the first text message with IBM launching the first smart phone in 1994 but it didn’t quite take off until Ericsson had another go in 2000.

By 2007 Apple had launched the iPhone and suddenly offices no longer had walls – office workers are now contactable for work all day, every day, via phone, text, email, social media and private messaging apps.

Take a look through the office images contained within our Melbourne Harbour Trust series below. 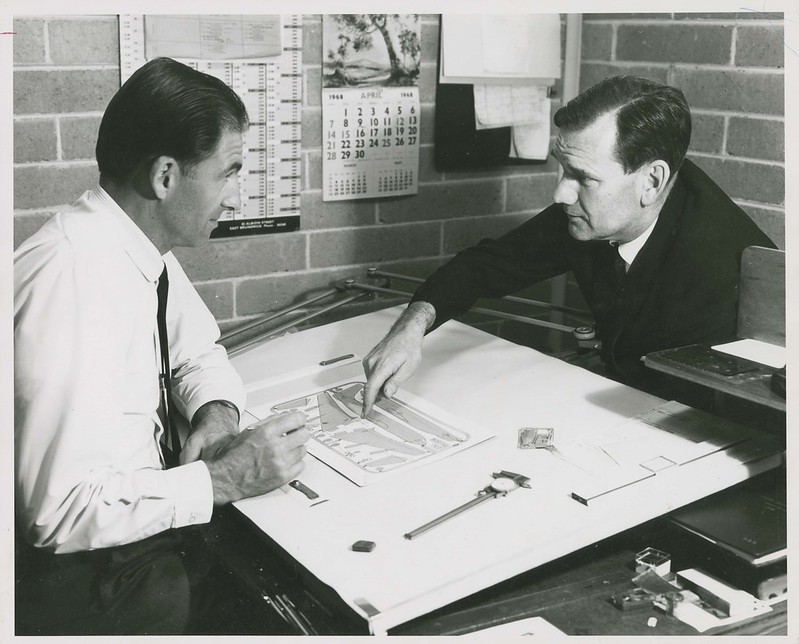 A brief history of the Internet in Australia, Roger Clarke

How the photocopier changed the way we worked - and played, Clive Thompson, The Smithsonian Mag online

The cubicle you call hell was designed to set you free, Nikil Saval, Wired.com