The PROV Collection has records related directly to Dunlop’s pharmaceutical studies in the 1920s, which he completed before turning to medicine. They show us a fragment of this great man’s beginnings; in a field that would have him help over a thousand Australian soldiers facing dire and often hopeless conditions. After finishing his studies at Benalla High School, Dunlop, aged 16, accepted an apprenticeship with a local pharmacist. The Pharmacy Board of Victoria  (VA 1349) kept a Register of Apprentices (VPRS 1782), as required by the Pharmacy Act 1876 (and later the Medicine Act), which recorded an apprentice’s registration entry. In this series we can find Edward Dunlop’s entry, confirming that he was apprenticed to Mr. W. McCall Say in Benalla, and that he transferred to Collingwood to pharmacist J. Garrick, sometime soon after. The very same agency also kept a Pharmaceutical Register of Victoria (VPRS 16384) certifying the registration of pharmaceutical chemists.

This register confirms that Dunlop took his Final Exam on the 5th of December 1928 through a correspondence course at Ormond College. The date of his registration is listed as the 9th of January 1929; this is the date he was admitted as a pharmacist with the certificate number 2592. Dunlop graduated top of his class in his Pharmacy course and would do the same when studying Medicine at The University of Melbourne. He enrolled in the Royal Australian Army Medical Corps soon after his graduation in 1934, and enlisted at the outbreak of the Second World War in 1939, while completing his post-graduate surgical training in England. His enlistment would see him recognised, in due time, as a surgeon of considerable skill who served in a senior position in the Middle East. Dunlop’s service with the Australian Army Medical Corps eventually saw to his arrival in Java, Indonesia in 1942 where he was to help Australian and Allied troops.

The hospital was captured by the Japanese army and Dunlop, upon refusing to leave his patients, became a prisoner of war. Along with other POWs, he was sent to Thailand to work on the Burma – Siam Railway, a Japanese engineering project that cost the lives of one hundred thousand native labourers and Allied soldiers. They were the first Australian group sent to work on the railway. Serving as Commanding Officer, Dunlop was also in charge of the Allied general hospital in Bandung (Central Java) which housed over a thousand patients. Here he inspired those suffering the conditions of the labour camps. He protected his men by not only trying to improve the harsh living conditions, but risking his own life for the sake of patients that the Japanese officials thought disposable. Often he convinced the officials of sick men who were simply not well enough to work on the railway. Those who weren’t so lucky would slave away, eventually dying from severe sickness and malnutrition.

After the war ended, Dunlop would continue with his benevolent efforts, concentrating on the health and welfare of former POWs and making a concerted attempt to promote better relations between Australia and Asia. Through consultation with records found in a series generated by the Pharmacy Board of Victoria, we can, therefore, observe Dunlop’s beginnings in the medical profession; a profession which had him contribute an unparalleled amount of himself to others. Sir Ernest Edward “Weary” Dunlop passed away in 1993 and a state funeral was held in his honour where thousands of people lined the streets of Melbourne. A statue of Dunlop was unveiled on St Kilda Road, Melbourne in August 1995 and each year, on the day of his birthday, a commemorative service is held to pay respect to this great Australian hero.

For further information or to view images visit the PROV Wiki. 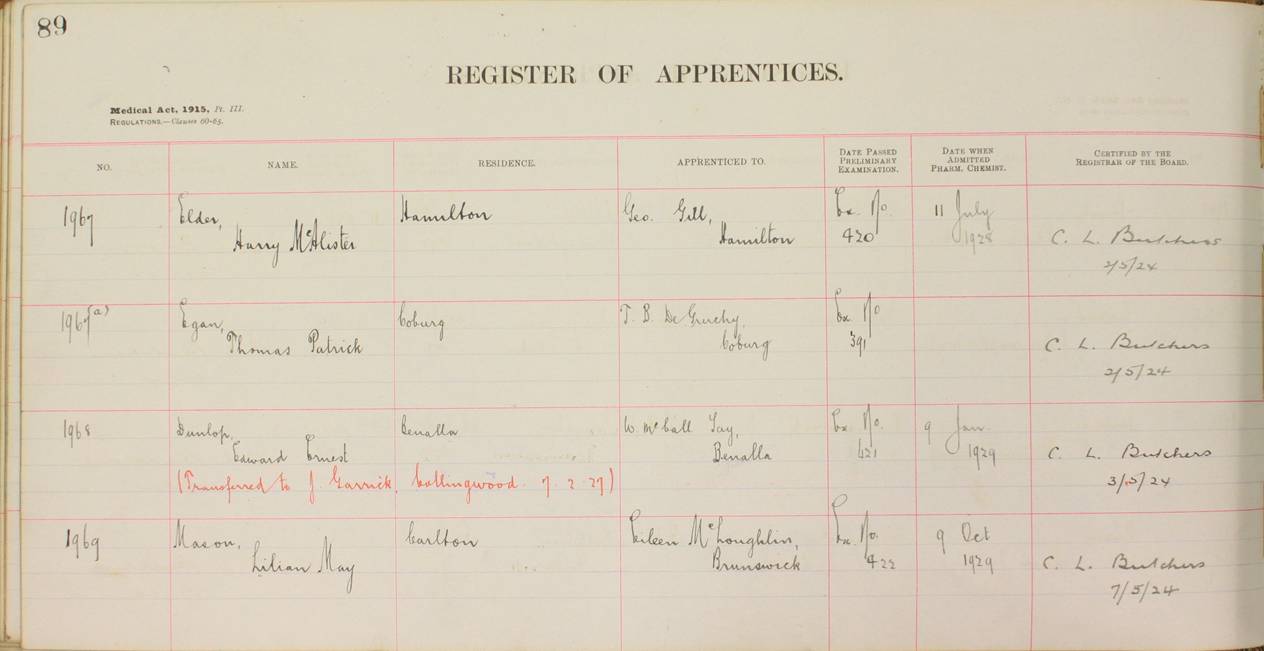