Sir Harold Winthrop Clapp (7 May 1875 – 21 October 1952) was a transport administrator with the Victorian Railways who over the course of thirty years revolutionised railways as we know it.

Clapp introduced faster services and more powerful locomotives, supported the farming sector and presented a report on standardising rail gauges (track width) which then led to a uniform rail gauge across capital cities.

Clapp was renowned for his unprecedented attention to customer service and a paternal management style. He had a fantastic memory and learned the names and faces of thousands of railway employees. His concern for worker conditions was genuine and he was personally responsible for improvements within the industry such as better sanitation facilities and the provision of good cafeterias.

Clapp became Chairman of Commissioners of Victorian Railways in 1920 and remained Chairman until his retirement in 1951.

Harold W Clapp was appointed a Knight Commander of the Order of the British Empire (KBE) in 1941 in recognition of service to public service.

Sir Harold resigned from the Victorian Railways in September 1951 due to declining health, but continued to act as a consultant to the Department of Shipping and Transport. On 14 July 1952 Harold was honoured by having the new revolutionary B Class Diesel electric Locomotive named after him, the B60 - Harold W Clapp.

Harold passed away 21 October 1952. He left behind a wife, and three children. He was tributed far and wide, including by then Prime Minister Robert Menzies. He was praised as a remarkable man and his list of accomplishments are to this day considered momentous and ground-breaking. 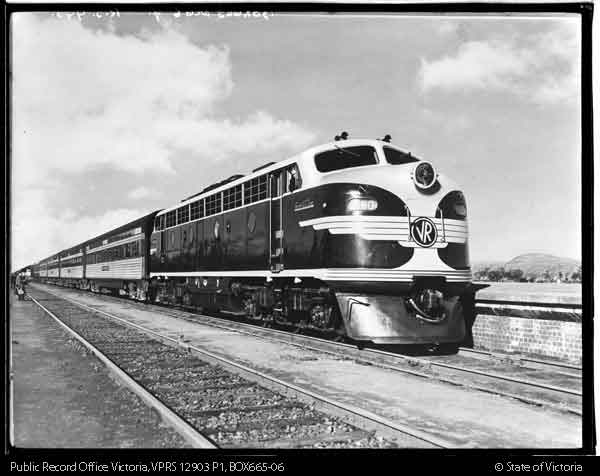 The first B Class locomotive (number B60) was launched in July 1952 and was named the Harold W Clapp.

A very popular and important locomotive for the next few decades, the 26 B Class locomotives operated on broad gauge lines throughout Victoria, working with many important passenger trains, as well as fast freights.

In the 1980s it was decided to try to rebuild the now aging B Class Loco’s into A class locos.

In 1985 after 11 Loco’s had been rebuilt the project was abandoned due to funding issues and rising costs. This combined with the inception of new higher powered locomotives rendered many of the B class superfluous and a few were scrapped. Others were purchased by private vendors, some were stored and as of 2014 only three of the original B Class Diesel electric Locomotives are still in service.

In 1983 the B 60 – Harold W Clapp was converted to an A Class Locomotive – A 60 Sir Harold Clapp and continued as a passenger loco for many years. It is currently in storage.

Special thanks to Phil Dunn for the loan of the Victorian Railways ‘B’ Class – B 60 Harold W Clapp - Locomotive model.