From the 2nd to the 19th of August, Melbourne is set to host the 66th Melbourne International Film Festival (MIFF). MIFF is the leading film festival in Australia and one of the world's oldest film festivals, alongside Cannes and Berlin.

To celebrate this year's program, we've delved into the Public Transport Corporation photographic collection to find a treasure trove of films advertised on billboards throughout Melbourne between 1930 and 1940. If MIFF had been running way back when, we're sure these films would have made an appearance!

As many photos from this collection are undated, by researching the films and products displayed on the advertising hoardings in each image we can more accurately estimate the date of each one - similar to how you might look at the clothes being worn or cars being driven in undated street scapes.

The first photo shows Princes Bridge Jolimont Yard displaying a hoarding for the Hoyts Regent and Plaza. The films being advertised are the Joy of Living and Tom Sawyer. 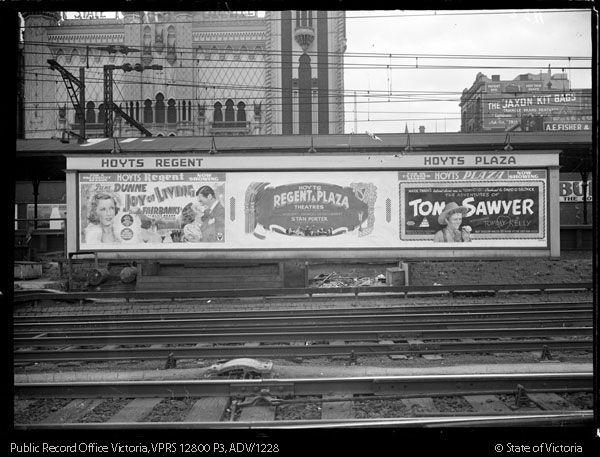 The Joy of Living was released in 1938 and starred Irene Dunne and Douglas Fairbanks Jr. The "screwball comedy" tells the story of Broadway star Margaret Garrett who spends her life working to support her family, until she meets Dan Webster who teaches her to have fun for the first time in her life.  While The Adventures of Tom Sawyer stars Tommy Kelly as Sawyer and Jackie Moran as Huckleberry Finn as they play make-believe on the Mississippi River. Margaret Hamilton, best known for her role as the wicked witch in The Wizard of Oz, plays Mrs Harper in this film! 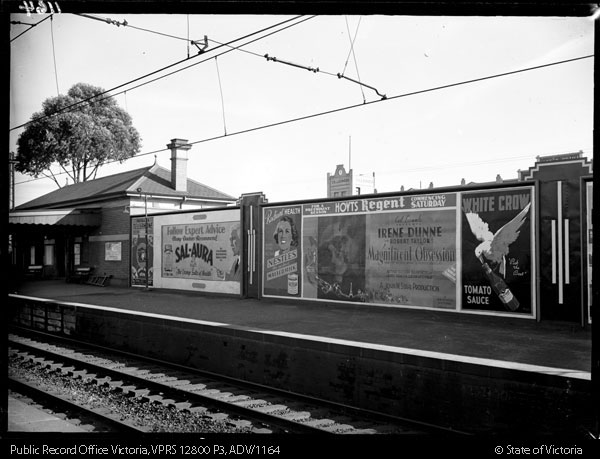 This photo of Footscray Station shows another Irene Dunne (aka the first lady of Hollywood) movie being advertised, this time alongside ads for Nestle and White Crow Tomato Sauce. Magnificent Obsession was released in 1935. In this film Irene starred alongside Robert Taylor who played a rich Robert Merrick who is saved by a hospital's only resuscitator. Another patient misses out on the lifesaving treatment as a result. Robert falls in love with that man's widow played by Dunne.

Irene Dunne was nominated for five best actress Academy Awards throughout her career, though not for either of the films detailed here, but she never won. But she did receive a star on the Hollywood Walk of Fame in 1960. However she once said:

"No triumph of either my stage or screen career has ever rivalled the excitement of trips down the Mississippi on the river boats of my father." 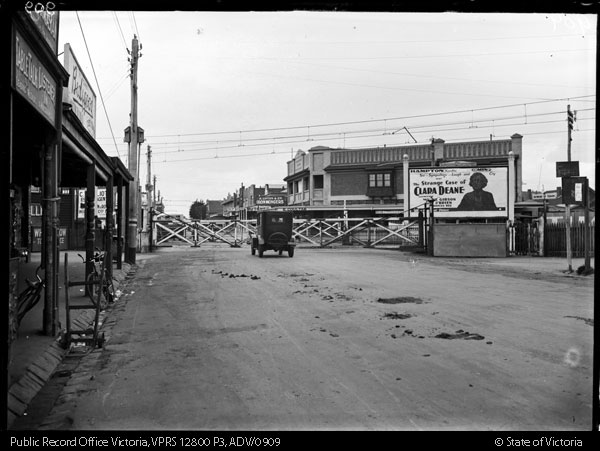 This photo of Hampton Street in Hampton shows the level crossing closed to traffic. The car waiting at the gates would have had plenty of time to mull over whether or not to go and see The Strange Case of Clara Deane starring Wynne Gibson. In the 1932 drama a young dress designer marries an insurance agent who also happens to be a criminal, played by Pat O'Brien. 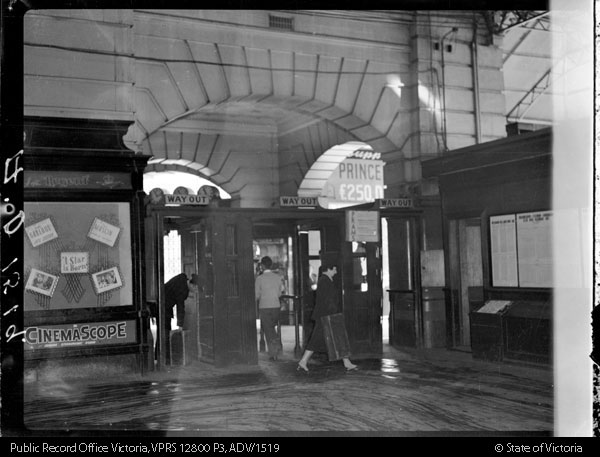 This fabulous photo taken inside Flinders Street Station in September 1955 shows a Cinemascope poster featuring the film A Star is Born. The original 1937 film won best writing and original story at the Academy Awards and starred Janet Gaynor as the young woman with dreams of stardom. In 1954 it was remade with Judy Garland in the lead role, earning high praise from Time Magazine, who wrote that Garland "gives what is just about the greatest one-woman show in modern movie history" (Time, 25 October, 1954). A Star is Born was remade twice more, in 1976 with Barbara Streisand and again in 2018, staring Lady Gaga. 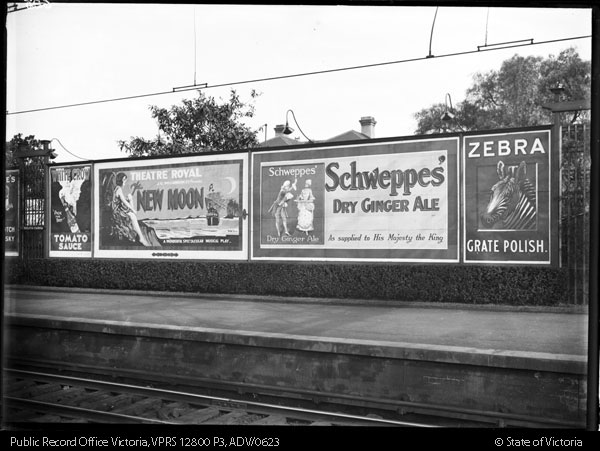 This photo was taken at South Yarra Station and shows posters for Zebra Grate Polish and Schweppes hung on the fence alongside the promotion for the J C Williamson stage production of New Moon at the Theatre Royal. The Bourke Street theatre was demolished in 1933, but New Moon lived on as a Hollywood musical. The 1940 film starred Jeanette MacDonald and Nelson Eddy. The film was once voted as one of the 50 worst films of all time though it included songs by Oscar Hammerstein. Of her costar Eddy, MacDonald once said:

"He was a big, awkward hunk of a man, very shy. He made me feel uncomfortable because all he did was look at me."

Those feelings seemed not to have lasted long as they embarked on an off-screen affair and made eight films together. The pair were known as America's Singing Sweethearts. Years later when asked why she married Gene Raymond instead of Eddy she said:

"I must have had rocks in my head!" 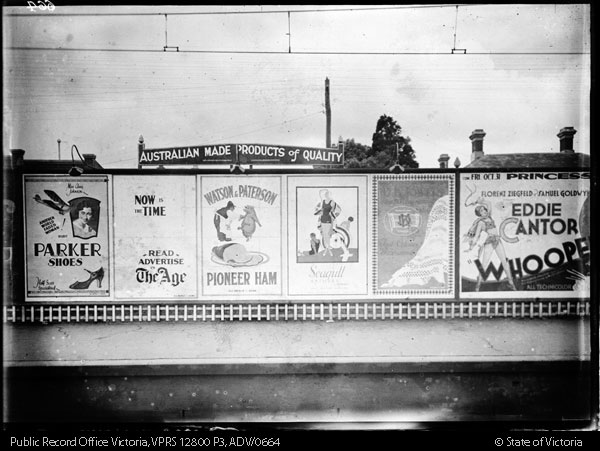 Finally we arrive at this hoarding for Parker Shoes, Pioneer Ham, The Age and the film Whoopee! starring Eddie Cantor. Eddie plays Henry Williams who helps Mary Clister, played by Ethel Shutta, elope from her wedding. The film was the third most popular movie at the US box office in 1930. Cantor earned $100,000 for the role, plus 10% of profits.

imdb.com was used as the source of information for this post.

Search for more photos like these by typing "movie" into the search box on our Public Transport Corporation photographic collection page here.