Just last week Melbourne’s Lord Mayor; Robert Doyle announced the state government’s intention to upgrade the Queen Victoria Market. This major project will in turn create thousands of jobs both in the market and its surrounds, as well as construction jobs.  Whilst this new upgrade might be great for the future of Melbourne, with the local economy likely to garner an abundance of new jobs, with additional tourist dollars flowing in; the historians amongst us may question the past.

What is today known as the Queen Victoria Market, a vast and vibrant iconic Melbourne institution that locals and tourists alike frequent, was once the Old Melbourne Cemetery. This burial ground was in existence from as early as 1837.  However, with the gradual expansion and encroachment of the market place, saw the slow demise of the cemetery holdings, with land increasingly being taken over for the purpose of the markets.

As early as 1877 sections of the original cemetery which was allocated to Aboriginal and Quaker burials, as well as unused sections of the Jewish area were taken over for the purpose of the growing market place.  In 1917 the final burial in the Old Melbourne Cemetery took place, with exhumations beginning in mid-1920 with only a ‘narrow strip of land affected’, and only marked graves exhumed.  The cemetery was eventually closed permanently by 1922, reportedly having been the final resting place for up to 10,000 early Victorian settlers.  However, with exhumations about to begin contention ensued, as there were many notable pioneers buried within the Old Melbourne Cemetery, who’s resting place would have to be disturbed in order to convert the space into market holdings. Such significant Victorians buried, included John Batman, the founder of Melbourne; Mr James Jackson, the first merchant in Melbourne; and Mr J. H. N. Cassell, the first Minister for Customs. 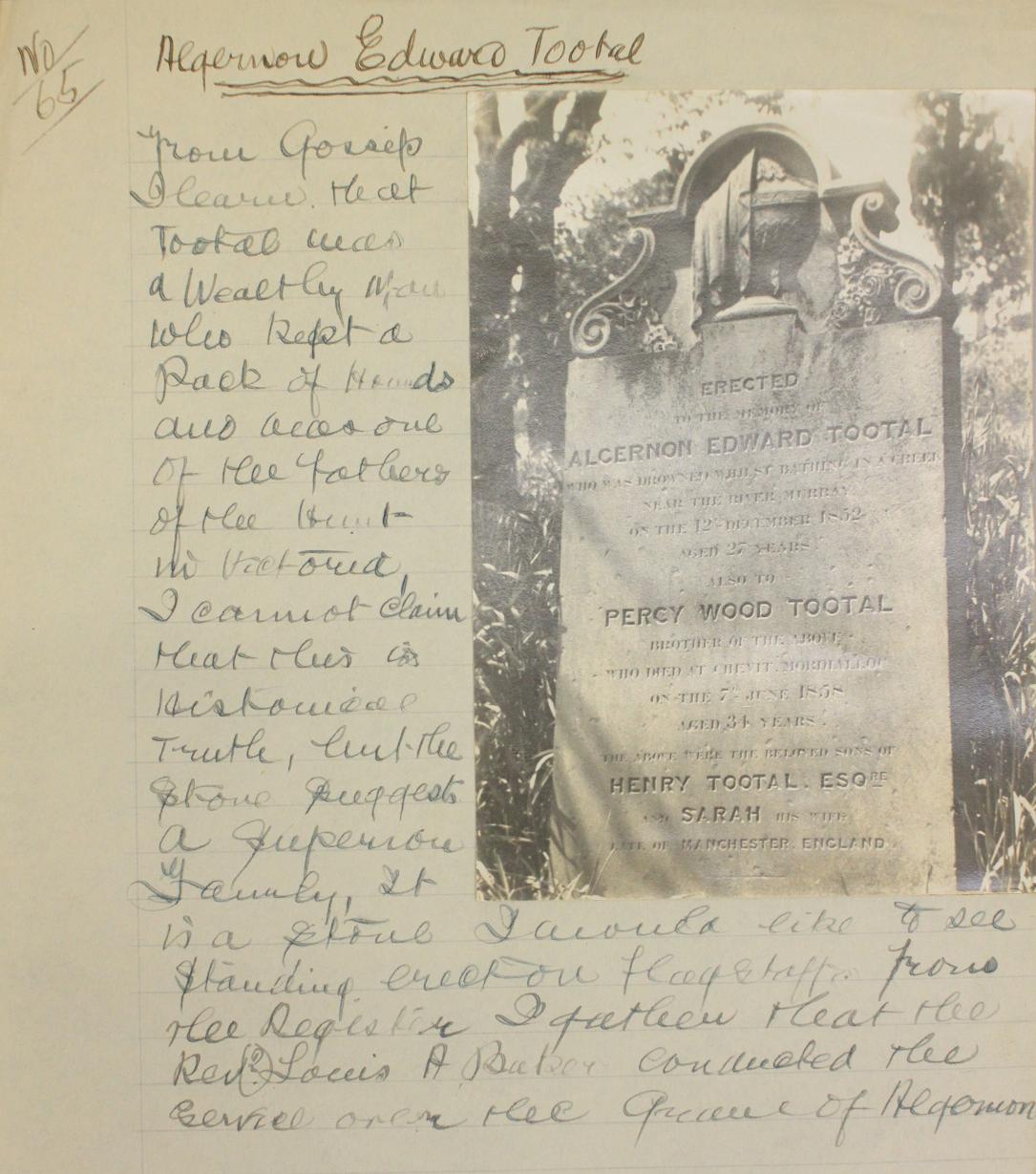 By the time exhumations were underway the responsibility fell to the Melbourne City Council, who identified 525 marked graves.  There remains, alongside many others were to be re-interred at the Fawkner General Cemetery, and later St Kilda, Melbourne General and Springvale Cemeteries.  However during further excavation works in the 1990s more remains were uncovered.  And again in 2011 the Melbourne City Council put together a plan for a proposed two-level underground car park at the markets, which brought the history of the site back into prominence, with Councillors arguing that the excavation of the site would not be ‘an issue’ if remains were to be uncovered. 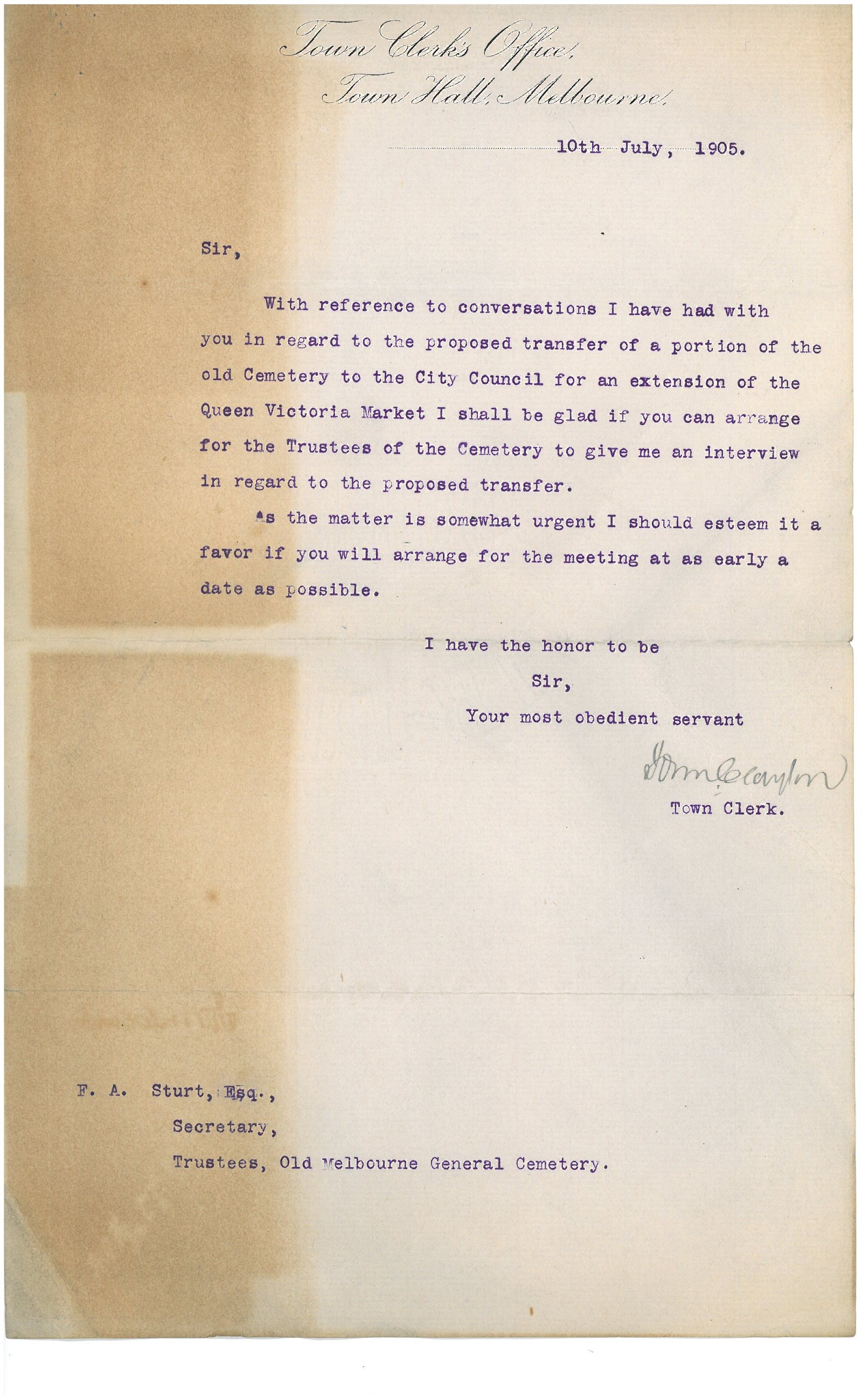 Within the records held here at the Public Record Office Victoria (PROV) is a plethora of interesting information from the Old Melbourne Cemetery, which includes such things as notes on exhumations, correspondence and letter books regarding the Old Melbourne Cemetery and records of significant graves.  These records, along with Melbourne City Council minutes and records from the Board of Land and Works and the Public Works department can be a great starting point to dig a little deeper into the history that is the Queen Victoria Market.