Public Record Office Victoria’s PROVisualizer tool, as far as we know, is the first interactive archival data visualisation tool in Australia. It is a handy tool to get a sense of the kinds of public records PROV holds.

You can search by keyword or by government function and then click through to see the series within the collection. Importantly PROVisualizer gives archivists and record keepers a taste of what the recent Records-in-Context ICA standard could look like, as it is based on a graph of entity inter-relationships as opposed to a hierarchical model. 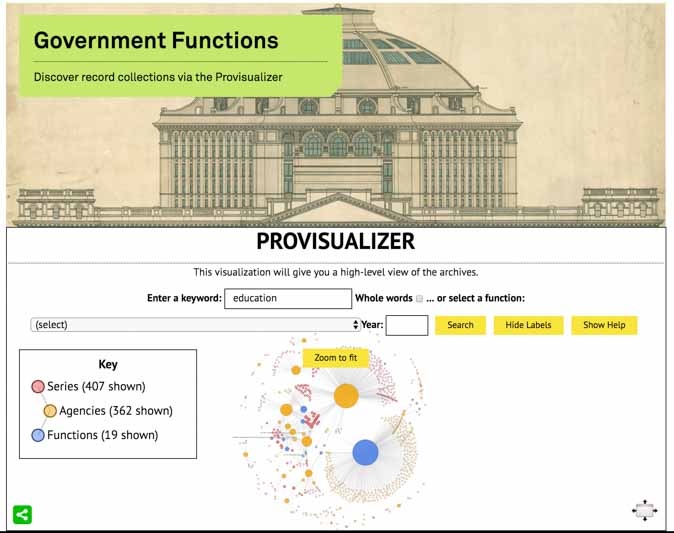 The tool has already proved useful for record keepers and academics.

Helen Harris OAM, a highly experienced researcher believes PROVisualizer will make exploring the archives for beginners a much easier prospect enabling almost Google type searches based on keywords and topics such as http://beta.prov.vic.gov.au/provisualizer#teacher%20record__words (Teacher Record) or http://beta.prov.vic.gov.au/provisualizer#melbourne%20olympics__words (Melbourne Olympics)

“This makes PROV searches so much easier, particularly for beginners who tend to get lost in trying to follow things on the current site.  To be able to search something fairly broad, then hone in on the interconnected records and bring up the relevant Series so quickly is a major advance.”

The tool is also useful for tracking changes to Government departments and responsibilities.

“The PROVualiser gives you an understanding of how government records are shifted around and responsibilities absorbed into different parts of government. I searched under the broad theme of environment and found a very broad ranges of functions to explore further.”

For government record keepers who are particularly interested in Machinery of Government changes over time, you can filter the results by year e.g. 1850, 1900, 1950 and see the ‘explosion’ of Agencies responsible for Education in Victoria.

Another example is the search of consumer affairs, if you filter by year the PROVisualizer will take you on a journey through the administration changes in this agency. Any agency can do the same.

If you use the tool  or embed it into your own website (a simple copy and paste!), we’d love to hear all about it either on twitter by using the #provisualizer hashtag or by emailing asa.letourneau@prov.vic.gov.au